A Few of My Favorite French Films

On my first day of high school, all freshmen had to select a foreign lanaguage to study. I knew my parents wanted me to take Spanish, but I had my heart set on French. The summer before high school started, my mother made the mistake of giving me her video rental card and I spent the summer watching at least  five to 10 films a week and quickly fell in love with all things French!

I was amazed at how lovely the language sounds, the chic way they dressed, the sophistication they oozed, and the general coolness of the “French way." Unfortunately I did not excel in the French language (I'm just one of those people who struggle to learn or speak another language), but my love of French culture remained. Here are a few of my favorite French films:

Band of Outsiders (Bande à Part) – The French title derives from the phrase faire bande à part, which means "to do something apart from the group." It was directed by legendary French New Wave founder Jean-Luc Godard. There is a very cute scene in the film where the main characters decide to see how fast they can run through the entire Louvre Museum. (Rated PG) trailer

The 400 Blows (Les Quatre Cents Coups) - Considered a classic in French cinema by some, it portrays the story of a troubled boy in Paris. (Rating PG) trailer

The Red Balloon - This 1956 classic short film is a beautiful story of a boy and his balloon. The boy discovers his balloon has a mind of his own and follows him everywhere. Even though it’s only 34 minutes long, it’s a lovely story. (Rated G) trailer

Gigi - Okay, I'm not sure if this qualifies as a French film because it's an American musical, but it's set in the turn of the 20th century Paris. (Rated G) trailer

The Dreamers – This film might not be for everyone. It’s the story of an American student in Paris during 1968. He meets a brother and sister and quickly gets caught up in their lives. The group shares a love of film and eventually the friendship turns into a sexual relationship. I enjoyed the film for its references to other films and the turbulence of 1968 France. (Rated NC-17) trailer 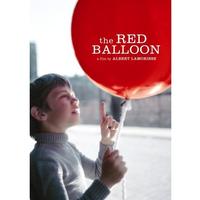 Amélie movie poster
4 Comments | Add a Comment
I'm pleased to see that the library also has two older movies that I saw while taking French in college - *Jean de Florette*, starring Gerard Depardieu, and its sequel, *Manon of the Spring*. The library even has the American remake - *Sommersby* - and a few copies of the novels that the films were based on (published as a single book titled *Water of the Hills* by Marcel Pagnol). Bien fait!
Carolyn - Philadelphia
I remember seeing The Red Balloon in grade school. I loved that movie! I actually forgot about it. Thanks for bringing it back into the spotlight. I hope more people will watch and enjoy this delightful movie as I did.
Amy - US
You should also check out Ma Vie En Rose. It is a great film about a transgendered child.
Mariselle - Philadelphia
I really enjoyed Ameliw. I remember seeing it when it first came out in France. It is a real nice refreshing romantic comedy. Haven't really seen Audrey Tautou in many other movies after this. Or did I miss them.
Jeff - Hamilton, Ontario