“This Is a Watchbird Watching YOU”

Recently, I began processing the papers of children’s book author and illustrator Munro Leaf. Having already processed the Frederick R. Gardner collection of Robert Lawson, it was a perfect transition to move to the Munro Leaf papers. Munro Leaf (1905-1976) wrote The Story of Ferdinand (1936) for his friend Lawson to illustrate, and they collaborated on three more children’s books: Wee Gillis (1938), an adaptation of Aesop’s Fables (1941), and The Story of Simpson and Sampson (1941). After Frederick R. Gardner donated his Lawson collection to the Rare Book Department of the Free Library of Philadelphia, Munro Leaf’s widow, Margaret, decided to do the same with his papers.

Munro Leaf may be best remembered for Ferdinand but it was finding the material for his long-running Watchbirds series that was an early highlight in the collection. The Watchbirds series reminded me of the Goofus and Gallant cartoons in Highlights magazine that I read at my dentist’s office as a child. (Fun fact: Highlights magazine also ran a similarly themed series by Munro Leaf, Checkaway, in the 1950s.) The Watchbirds cartoons started out as a recurring column in Ladies Home Journal in 1938, but remained a fixture in the cultural mindset even after Leaf’s death in 1976: we have a Watchbirds calendar from 1978 and the most recent Watchbirds book, Four and Twenty Watchbirds, was published in 1990.

The Watchbirds flip the concept of bird-watching onto any potential childhood naughtiness. Did you (or might you) complain about going to bed on time? Refuse to brush your teeth? Throw a tantrum? Watch out, for there’s a watchbird watching YOU. After their popularity grew in Ladies Home Journal, the Watchbirds cartoons were compiled into five books and there is even “The Watchbird Song.” The cartoons followed a standard pattern: a naively drawn caricature (see the original art for “a SQUIRMER” at right) would be accompanied by a cute explanatory caption and two watchbirds. One watchbird would be disappointedly watching the Squirmer, the other would be watching YOU. A SQUIRMER is described by Leaf:

“Squirmers never sit still. They wriggle and wriggle and twist and turn until you wonder why they don’t fall apart. This one in the picture squirmed so much we couldn’t tell whether it was a boy or a girl. Squirmers are terrible at the table or in the barber shop.”

The Watchbirds may be a bit Big Brother for 2011 (they are particularly intimidating when found on adult-targeted brochures, like the one Leaf decorated for the Better Citizens Booth of the League of Women Voters), but Leaf’s captions and absurdist drawings soften the nagging. And if you’re interested in other ways Leaf endeavored to humorously indoctrinate children into good behavior, you might enjoy Manners Can Be Fun (1936), the second entry in a long and occasionally absurd series of titles (1976’s Metric Can Be Fun! is a personal favorite). There’s plenty more in the Munro Leaf collection, so check out our Facebook page for updates or make an appointment to come visit the Rare Book Department to see his whimsy in person! 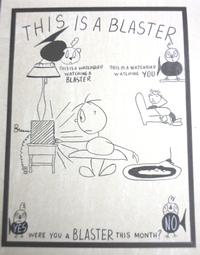 Turn that TV down! (Page proof from 1978 Watchbirds calendar)

Over three feet long, this poster will get your attention. Children's Dental Health Week, 1953. 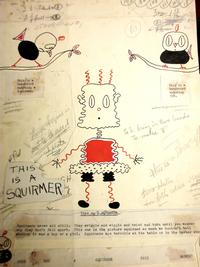