Banned books—more like the best books, am I right?

So why would a library have banned or challenged books? Because as the adage goes, "A truly great library has something in it to offend everyone." And because the library is a place where you can learn—and I don’t know about you, but I was WAYYYYYY happier as a teen to learn about drugs and sex via books than experimenting in real life. Or maybe that was my parents.  Either way, you can probably tell I’m a super nerd for life. So there’s that.

But banned books really are kind of the best books. They are the books that tell the truth, they are the books that help us build empathy, they’re the books that give us a window into an experience we might not have had or a mirror to show us that we’re not alone—that someone else has had this experience, too. (All credit to Dr. Rudine Sims Bishop, who coined the phrase "Windows and Mirrors" in her seminal work "Windows, Mirrors and Sliding Glass Doors" (Bishop, Rudine Sims. "Mirrors, windows, and sliding glass doors." Perspectives 6.3 (1990): ix-xi.) 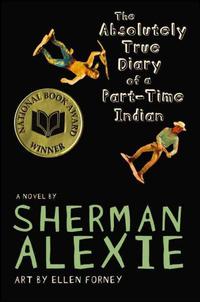 One of the most frequently challenged books of the last 10 years is Sherman Alexie’s The Absolutely True Diary of a Part-Time Indian. I remember reading this book and being swept away by the world building Alexie did. He brought me into the world of a young man who decides that the school on the reservation doesn’t offer him the same opportunities (it doesn’t; it's way underfunded) as the "white" school in town. So there he is—picked on by his friends on the rez for going to the "white" school and picked on by the white kids for being indigenous. And poor. And different. There is a lot more going on in the book—a realistic look at what it’s like to have a parent who suffers from alcoholism, dealing with the destructive effects of structural racism and classism—not to mention the stuff that comes with being a teenage boy (because boys are gross—no offense). This book is by turns funny, sweet, enraging, tragic, hopeful—basically, it’s everything you want in a good book. It’s frequently challenged because of the racism, language, and sex—but, if we are being honest with each other, these are all things that were faced by the author growing up, and by most of us growing up. So pretending that racism, language, and sex don’t exist, or that someone in their teens isn’t ready for them, seems silly, no? Especially when handled in such a forthright manner by an author at the top of his game. It won the National Book Award, for goodness sake. 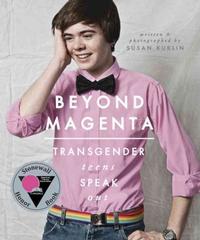 Another frequently challenged book is Beyond Magenta: Transgender Teens Speak Out by Susan Kuklin. It’s a collection of interviews with real-life teens who are either transgender or gender neutral, documenting the before, during, and after of their transitions. The author uses stories and photographs to let each young person tell their own story—and I think this helps make each teen a real person to the reader. There is no one "transgender" or "gender neutral" story—there are many. I really love how these stories and interviews show how each family handled the transition (some better, some worse), and how relationships with friends and communities were affected. This book is frequently challenged for being anti-family, for offensive language, for presenting a political viewpoint—but honestly, I think most of that is nonsense. I think this book is actually really pro-family and shows how important family relationships are. Any "language" or "sexuality" isn’t gratuitous—it’s part of the personal stories I found really compelling and enlightening. I would highly recommend this one, especially if you are like me and love crying and being inspired. 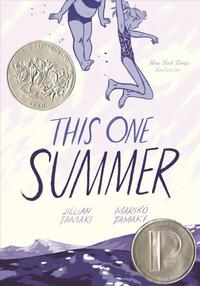 There is another book that has faced a huge number of challenges since its publication in 2014, a coming-of-age graphic novel by cousins Jillian and Mariko Tamaki called This One Summer.  Taking place over the course of a summer, we follow two friends—one who is ready to make the leap to teenager-hood and all the cool and dangerous things that come with it, and the other who would rather hang on to being a kid a little longer. This book was a New York Times bestseller, won a Caldecott Honor for Outstanding Illustration, was a Printz Honor book for Best Writing for Young Adults, and was an Eisner Award winner for Best Graphic Novel. The critics are agreed: This book is great. So why so many challenges? Most of the challenges are for sexual content and language—our tweens overhear some older kids talking about sex and drugs and later they learn that one of these older girls has become pregnant. It’s the kind of a window into adulthood that is oh-so-enticing to those on the precipice. It feels dangerous, cool, interesting, adult. I don’t know if I’ve ever read a more perfect distillation of the experience of a young woman on the cusp—and I’ve read a TON of coming-of-age books AND been that awkward pre-teen—so you can take my word for it when I say this book is the real thing.

So, while I’m too old to run a secret banned-books library out of my school locker (seriously, why is this kid so much cooler than I was?), the great news is that I get to work in a real library—a library that affirms the rights of everyone to read widely and diversely and without judgement. Basically, you should read all of these challenged and banned books—they are quite literally some of the actual best books out there!