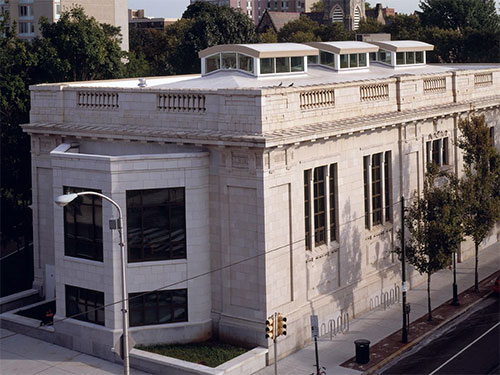 Located near the University of Pennsylvania, the Walnut Street West Branch has been serving West Philadelphia since 1906, celebrating its 110 year anniversary in the spring of 2016. The building was fully renovated in 2004, and the entrance was restored to its original location on 40th Street. Located near a parking garage, supermarket, movie theater, bank, and a wide variety of upscale eateries — the library serves the communities of University City, Spruce Hill, Cedar Park, and Garden Court.

The Walnut Street West Branch opened on May 28, 1895, making it the fifth Philadelphia Public Library branch. It was housed in a suite of three rooms on the first floor of the West Philadelphia Institute at 40th and Ludlow Streets, and became a branch of the Free Library of Philadelphia on January 1, 1896. After expanding to 5 rooms, the branch moved to the Hamilton School Building, 4105-09 Chestnut Street on May 1901. The branch was known as the West Philadelphia branch at this time.

The building Walnut Street West is currently housed in opened to the public on June 26, 1906. It was the first of thirty libraries funded by a grant from Andrew Carnegie and was built at a cost of $80,387.68 on land donated by Clarence Clark, a West Philadelphia banker. Mr. Clark’s will deeded the land to the city "in perpetuity" as long as a library sat on it. During the first year of operation, 79,683 books were borrowed from the branch. A lecture hall seating 300 people was part of the lower level.

In 1960, the branch added air conditioning and moved the public entrance to Walnut Street. From 1998 to 2004, the library was housed in temporary quarters at 3927 Walnut Street as the facility underwent a complete renovation, adding a second level and making use of “green” environmentally-friendly materials and technology. The entrance was then moved again to the original location on 40th Street. A mural of West Philadelphia scenes by artist Paul Santoleri now welcomes visitors.