“All smudged with paint and smeared with clay, We wave our greeting this Christmas day”: Artists’ Christmas Cards in the Free Library of Philadelphia’s Special Collections 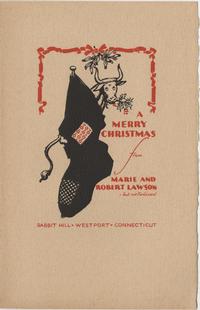 Ferdinand the Bull was Robert Lawson's most famous creation. In this Christmas card by Lawson, he peeks shyly out of a stocking.
This comical Christmas card by Lloyd Alexander is a self-caricature by the author.
Although most often remembered now for her children's books, Carolyn Haywood was also an accomplished mural painter who once served as an assistant to Violet Oakley. Here she depicts herself working on large-scale mural.

It’s the most wonderful time of the year . . . the time when we get to show off all of the beautiful artists’ Christmas and New Year’s cards in the children’s literature collections of the Free Library of Philadelphia. When we started processing the papers of children’s authors and illustrators Lloyd Alexander, Carolyn Haywood, and Robert Lawson as part of a CLIR-funded “Hidden Collections” grant, we didn’t expect that some of the most charming pieces of artwork would be mundane, ephemeral greeting cards. But these artists’ creativity spilled over into everything they did, and their handmade Christmas cards are often miniature gems. Robert and Marie Lawson even designed Christmas cards professionally, producing one a day for three years in the 1920s in order to pay for their first house. Other authors like Lloyd Alexander, best known for his Chronicles of Prydain series, only dabbled in drawing. Alexander’s humorous self-caricatures adorn Christmas cards sent to his friends, who would be sure to get the joke. Carolyn Haywood’s papers include not only the cards she designed, but also the hand-made cards sent to her by her artistic mentors, the Red Rose Girls. Don’t miss this seasonal exhibit, now on display on the ground floor of Parkway Central!

These books seem great. It's so amazing that Philadelphia is finally focusing on events that make the Holidays special.
- Philadelphia Mon, December 05, 2011
Looks great, its good to see good books, I am going to try read them :) Jarida
Jarida - Philadelphia Sat, January 07, 2012