A Celebration of Nelson Mandela's Life Through Word and Song

"I have cherished the ideal of a democratic and free society in which all persons will live together in harmony and with equal opportunities. It is an ideal which I hope to live for. But, my lord, if needs be, it is an ideal for which I am prepared to die." - Nelson Mandela, speaking at the Rivonia Trial in South Africa, 1964. Afterwards, he would be sentenced to life imprisonment, serving 27 years behind bars before being freed and then triumphantly becoming the first democratically elected president of South Africa.

As we're sure you've heard the news by now, read the obituaries from around the world, and watched footage of the memorials from South Africa on television and online, anti-apartheid revolutionary, social activist, and politician Nelson Mandela passed away last week on December 5 at the age of 95.

To say that Nelson Mandela was an important figure in the 20th century and beyond would be an understatement. He was more than a mere man, more than the many names bestowed upon him. He was a force of nature and a catalyst for change, not only in his own country but around the world. The trials and tribulations of his life are the very definition of "the triumph of the human spirit". One such reward for his unwavering convictions was being presented with the Philadelphia Liberty Medal in 1993 by then U.S. President Bill Clinton. It would be one of many, many awards and accolades bestowed upon him in his later years.

The first time I became aware of Nelson Mandela, or probably any notion of political matters, was hearing a song on a mixtape blasting out of a friend's boombox while skating around an empty parking lot as a kid in '80s suburbia.

"21 years in captivity
Shoes too small to fit his feet
His body abused, but his mind is still free
Are you so blind that you cannot see, I said ...
Free Nelson Mandela ..."

The Special AKA (formerly the 2 tone British ska band The Specials) mixed protest politics with pure pop perfection and a dance backbeat, earning them a top 10 UK hit with the song in 1984. Thanks to college radio, MTV, and mixtapes though, the song would find listeners all around the world.

It would still be another 6 years until Nelson Mandela was freed from prison.

In addition to that song, one of the other impressionable songs and videos of my youth relating to political protest and Nelson Mandela was Artists United Against Apartheid, released just a year later in 1985. When you heard and saw the cavalcade of musicians shouting that they "Ain't Gonna Play Sun City," I immediately took notice and wanted to know what they were singing about!

The lyrics and topics being sung about in these songs weren't being discussed or taught in my school classroom, and there was no Internet or Google yet, so if I wanted to find out more information, I had to go to my local library.

When a person with the magnitude of historical and social importance that Nelson Mandela possessed passes away, it's important that institutions such as libraries help to keep that person's legacy and spirit alive. The Free Library's collections hold a wealth of information, and in the case of Nelson Mandela we have collected and preserved books, music, film, and electronic resources about and influenced by his life and work. To quote the man himself, "Education is the most powerful weapon which you can use to change the world."

Here is a playlist from our Spotify channel, compiled with some more musical selections from our collections that celebrate Nelson Mandela's life.


As for literature, Mandela himself took strength from and was inspired by The Bard while in prison. His copy of The Complete Works of Shakespeare was disguised in Diwali cards so the guards would not confiscate it. Mandela also read William Ernest Henley's poem "Invictus" to his fellow prisoners. The poem, about never giving up, resonated with Mandela for its lines "I am the master of my fate. I am the captain of my soul." (more on "Invictus"-influenced film about Mandela below).

There are many books about Mandela and also many penned by the man himself. A good place to start is this booklist created by our staff.

We have also compiled a booklist tailored to children to introduce them to and teach them about the South African leader's life and accomplishments.

As for the world of film, there's Invictus, where Mandela (played impeccably by Morgan Freeman), in his first term as the South African President, initiates a unique venture to unite the apartheid-torn land of South Africa: enlist the national rugby team on a mission to win the 1995 Rugby World Cup.

The next time you can see Mandela's life story on the silver screen will be on Christmas Day when Mandela: Long Walk To Freedom premieres, with Idris Elba starring as Mandela and featuring the first new U2 song in four years, "Ordinary Love."

U2 are no strangers to protest songs and the above was not their first song about Mandela. The song "Long Walk to Freedom" or "46664" (named after Mandela's prison number) was originally written by The Eurythmics Dave Stewart and The Clash's Joe Strummer, but Strummer passed away before the song was completed. Stewart finished the song with Bono and U2 recorded a version, but it was never released. U2 did however perform it at a 2003 Mandela tribute concert below.


Please share this blog post t via social media or join in the conversation by leaving a comment and let us know your thoughts on the life, achivements, and passing of Nelson Mandela. 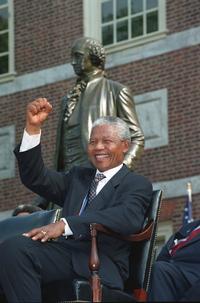 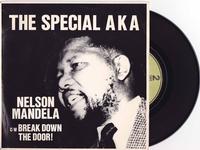 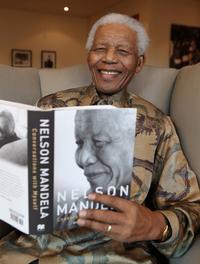 Nelson Mandela with his book Conversations with Myself
Add a Comment