Chong’s Not Here, But Cheech Is

In the 1970s, the counter culture comedy duo of Cheech and Chong (Richard "Cheech" Marin and Tommy Chong) laughed all the way to el banco as each of their successive bad-boy stoner albums turned gold, were nominated for Grammy Awards, or threw off singles that landed on the Billboard charts. They would win the Grammy Award for Best Comedy Album in 1974 for their third album Los Cochinos (The Little Pigs) and later secure a place in stoner culture for generations to come (or so I’m told) for their classic comedy Up in Smoke.

Or their slacker anthem "Earache My Eye", which debuted on their Wedding Album and was penned by rock and jazz guitarist Gaye Delorme:

"Earache" was later turned into a glam rock set piece (with horns) featuring Cheech as one of his favorite characters, the gender-bending Alice Bowie, for the out of control concert scene at the end of Up In Smoke.

Look closely and you’ll see a young Stacy Keach in Hare Krishna disguise playing yet another favorite Cheech and Chong character, Sargent Stadanko—the narcotics officer who tries to convince kids to turn in their family and friends for an unspecified amount of reward money.

At the time they broke into the "national consciousness," Cheech Marin and Tommy Chong had put in their 10,000 hours of apprenticing by playing in various bands, performing in various improv burlesque shows, and appearing in numerous comedy clubs in Canada and California. All the while the two comedians honed their timing and delivery, creating characters and a rapport that delighted audiences and knocked down walls across class and ethnicity.

Before you attend the upcoming event with Cheech, listen back to a talk by Tommy Chong at the library in 2008 for his book Cheech and Chong: The Unauthorized Autobiography.

Cheech Marin has dozens of other film and television roles under his belt, including a starring role on the television how Nash Bridges and voice credits in a slew of Disney animated films. His long-awaited memoir, Cheech Is Not My Real Name... But Don't Call Me Chong!, delves not only into his legendary entertainment career, but also how he dodged the draft, acquired an expansive collection of Chicano art, and became a self-made icon. 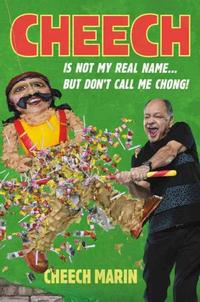 Cheech Is Not My Real Name... But Don't Call Me Chong! by Cheech Marin
Add a Comment