When we heard this week was Shakespeare Week, we knew we couldn’t miss out on the chance to get in on the fun from across the pond. We didn’t have to look far for inspiration!

Below, you’ll find a "greatest hits", if you will, of past Free Library blog posts devoted to The Bard himself, many of which include a nod to our 2014 Year of the Bard festivities – what fun that was!

And, since it’s also Women’s History Month, we thought this list was most appropriate to recognize 13 Shakespearean ladies we love! 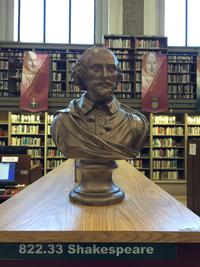 William has his very own corner in the Literature Department at Parkway Central Library!
Add a Comment