Dynamic Women of the Free Library

This Women’s History Month, we’ve been reflecting on the women who came before us.

This list is by no means exhaustive but showcases just a few of those who paved the way here at the Free Library of Philadelphia, and in many ways, broke the glass ceiling in terms of what was possible for women in the library world.

Join us in celebrating their contributions!

Carolyn Field joined the Free Library in the early 1950s as the Coordinator of the Office of Work with Children, a position she held for the next 30 years until her retirement in 1983. Also a published author, she received myriad awards throughout her career, including the Scholastic Library Publishing Award, the Distinguished Daughter of Pennsylvania Award, and the Drexel University/Free Library of Philadelphia Children’s Literature Citation. Shortly after her retirement, an award was named for her by the Youth Services Division of the Pennsylvania Library Association, still given annually to a Pennsylvania children’s author or illustrator of the book that is voted the best of the year by a committee of Public Library Association members. Carolyn began her career as a children’s librarian at the New York Public Library in 1938 and served in the American Red Cross in England during World War II. She passed away in 2010.

Helen Mullen succeeded Carolyn Field as Coordinator of the Office of Work with Children, and was instrumental in expanding the Free Library’s programs and services for preschoolers at a time when the focus had predominantly been on services for older children. She also served as chair of the Philadelphia Children’s Reading Round Table (PCRRT) and went on to win the Drexel University/Free Library of Philadelphia Children’s Literature Citation, as well as the American Library Association (ALA)’s Allie Beth Martin Award for outstanding achievement for a librarian.

Hedra Packman worked at the Free Library for many years, beginning her career as a Children's Librarian and retiring as Deputy Director of Library Services. A strong advocate for children and youth library services, she was trained by and worked under both Carolyn Field and Helen Mullen. She was the first head of The Office of Public Service Support (TOPSS), a department created to incubate and implement pilot projects and new initiatives. She created the Books Aloud! program for young children, redesigned the Summer Reading Game, and expanded the LEAP Afterschool Program to become citywide and include Teen Leadership Assistants, Teen Empowerment Summits, and the Associate Leaders program for college students. She was instrumental in creating our Hot Spots initiative and taking library services deeper into city neighborhoods. She helped the Free Library develop new librarians and empower staff through the Institute of Museum & Library Services (IMLS) "Growing Our Own" leadership grants. She helped create and implement many grant projects and new programs in materials management, literacy and access services, programming, and staff development, but is most proud of the William Penn Foundation $26 million project, Model Urban Library Services for Children, which renovated 34 libraries, added technology for the public at all locations, and transformed library services in the year 2000.

Elizabeth "Betsy" Orsburn worked at the Free Library for over 39 years. She began her career as a Children’s Librarian and went on to become a Neighborhood Library Manager, the Manager of the Film and Video Department, and the Manager of the Central Children’s Department. She became Chief of TOPSS and retired as the Interim Director of Library Service. Betsy always got the job done, no matter what it took to make the program or project work, including implementing the Hot Spots community computer labs and the new Techmobile to enhance community access to technology with the staff to support participants needs. She was also instrumental in leading a new approach to afterschool programming, helping to engage students from low-income communities and implementing new learning activities to support student’s success in school and in life. After retiring from the Free Library, Betsy went on to teach classes on children’s literature at Drexel University’s iSchool. She was also very active in the Association for Library Service to Children (ALSC) throughout her career, serving on the Board of Directors and beginning her term as ALSC President in June 2016.

Marciene Mattleman began her career as a sixth-grade teacher in Philadelphia, went on to earn a Ph.D. in education, and has devoted her life to serving the children of Philadelphia. She has extended that reach to make a difference in the lives of children through her work at the Free Library, serving as the former Chair of the Board of Trustees and on the Foundation Board of Directors. With an appetite for getting nonprofits off the ground, she launched the Mayor’s Commission for Literacy under former Mayor W. Wilson Goode, as well as Youth Education for Tomorrow, Philadelphia Reads, Philadelphia Futures, and the After School Activities Partnership (ASAP). While her work centers on education in schools and libraries, Marciene is also a connector and networker, who loves introducing people to others of similar professional interests.

And now, we’d also like to spotlight a few of the amazing women whose hard work and vision keep the Free Library of Philadelphia thriving today!

Siobhan Reardon is our President and Executive Director, and upon her hiring in 2008 became the first woman to lead the Free Library of Philadelphia system. Her work has included spearheading the Free Library’s initiative to move beyond its walls through a number of Internet- and technology-based initiatives and has also been instrumental in steering the creation of the ambitious five-year strategic plan for the Free Library, underscored by the mission to advance literacy, guide learning, and inspire curiosity. Her vision for the future, Building Inspiration: 21st Century Libraries Initiative, includes the launch of a new model of service wherein neighborhood libraries will undergo physical and programmatic changes to directly respond to and meet the needs of the surrounding neighborhood. In 2014, the Free Library Foundation, which she also oversees, merged with the renowned Rosenbach Museum & Library, combining two of the finest collections of rare materials into one of world-class standing with strengths in Americana and British, American, and Modernist literature. For these efforts and her visionary leadership of the Free Library, she was named Library Journal’s Librarian of the Year in 2015.

Josie Lewis has risen through the ranks since arriving at the Free Library in April of 2013 from the City of Philadelphia Mural Arts program, transitioning from Development Assistant to Development Associate to her current position, Assistant Director of Individual Giving within the Free Library of Philadelphia Foundation, the Free Library’s fundraising arm. Her responsibilities include implementing the Free Library’s solicitation program for unrestricted revenue; building a strong, intergenerational community of Library supporters; and inviting collaboration among departments to create fresh programming. Josie is inspired by and committed to her work because she believes in the talented staff and mission of the Free Library in the community. Her background is in fine art, and she holds a degree in Sculpture and Extended Media.

Jen Maguire-Wright is the Chief of the Free Library’s Materials Management Division, which is responsible for all of the collections and materials held at and loaned by the Free Library. Their oversight includes traditional items like bestselling novels, DVDs, and picture books, as well as more non-traditional items like games, puzzles, and train sets used for literacy building; electronic collections (ebooks, online research collections, streaming video…); and special collections (children’s literature, sheet music, maps…). The department, under Jen’s direction, selects and purchases library materials, describes them for placement in the online catalog, and monitors their use. Prior to her current role, she served as a Teen Librarian at the Blanche A. Nixon/Cobbs Creek Library and as a Web Development Librarian. She is also currently the Chair-Elect of the American Library Association (ALA)’s Gay, Lesbian, Bisexual, and Transgender Round Table, representing librarians, library staff, and customer needs for the LGBTQIA+ community. She loves to brainstorm about the "library of the future" and what the Materials Management team will be loaning next (psst, did you know we’re already loaning musical instruments and binoculars in birding backpacks… what’s next?! Go Pros? VR Goggles?)!

Jennifer Chang is the Chief of the Central Public Services Division of the Free Library and has been a part of the system since 1989. She has had success throughout her career managing diverse, high profile, and high circulation libraries with an emphasis on multicultural outreach and programming. She was recognized as one of Library Journal’s Movers & Shakers of 2001, and, under her leadership, the Independence Library received Library Journal's Library Buildings 2001 award. She was also a recipient of the 2002 Staff Service Appreciation Award by the Free Library and the 2002 Marietta King Diversity Award for Service to Minority Older Adults by the Office of Commonwealth Libraries. Born and raised in Taiwan, Jennifer’s passion lies in helping immigrants pursue their "American Dream." Since 2009, she has served on the Free Library’s New Americans Strategic Initiative Committee and assisted immigrants with signing up for health insurance through the Affordable Care Act Marketplace. She is actively involved in participating in local ethnic festivals to promote library services, conducting Chinese Culture & Language training to front-line library staff, mentoring teens to pursue college degrees, and contributing best practices for high standards of library customer service to non-native English speakers. She also performs a bilingual storytime for school children at the Independence Library's annual Chinese New Year celebration.

We couldn't do what we do today without dynamic, inspiring women like these, and the many that have followed them and will follow in the years to come! 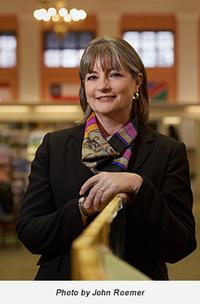 Siobhan Reardon, President and Executive Director of Free Library
2 Comments | Add a Comment
I was hired for my first children's librarian's position by Mrs. Field. She had a hotline to Drexel's program and those wishing to enter the field. My training, under Miss Mullen, was superb. I loved my years at the FLP. Is Hedra Packman also known as Hedra Peterman? I believe she was a branch librarian during my years 1974-1977. Can't wait to see what the pictures of the renovated Lovett Library when it is finished. It was a vibrant branch and I loved working there.
Susan Golden - Winston-Salem, NC
Thanks for sharing, Susan!
Kate C. - Philadelphia