Are You the Poetry 'Type'?

What if an entire community wrote one line each on a vintage Underwood Typewriter to create a really, really, long poem? Would it bring world peace? Would love abound? Would we become a united nation?  One can hope, right?

On April 3, South Philly poet, Maria Fama composed the first line of our poem. She pecked out her lines on the 1929 machine on loan from Philly Typewriter. By the end of the day, many others had followed suit. We've invited elementary and high school classes, local organizations, politicians and our library regulars to participate. By creating this program we are celebrating the written word and telling the world that words matter.

The Underwood typewriter is the creation of German-American inventor Franz X. Wagner. The name "Underwood" comes from John T. Underwood, an entrepreneur who bought the company early in its history. (The Underwood family was already a successful manufacturer of ribbons and carbon paper. It's said that when Remington decided to produce its own line of ribbons and carbon paper, Underwood responded, "All right, then, we'll just build our own typewriter!")

It just so happens that April is National Poetry Month, not to mention National Library Week was just last week. This program isn't just for South Philly residents. Anyone can drop in and tap out a line or two. Stop by anytime when the Fumo Family Library is open to add your voice! 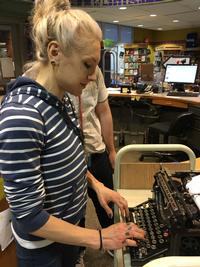 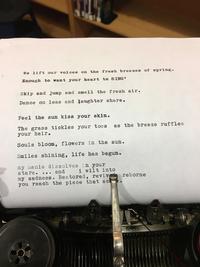