Music, Storytimes, and More in the Newly Renovated Shakespeare Park

Everyone in Philly is stooping this summer, and we wanted in! On the Parkway Central Library's front stoop—the newly renovated Shakespeare Park—the Free Library will present outdoor summer programming. As part of Oval+, which is an extension of the annual joint venture between the Fairmount Park Conservancy and Philadelphia Parks and Recreation at Eakins Oval, the Free Library’s Shakespeare Park programming will include jazz on Thursdays, weekend storytimes, theater performances, and more.

The Oval+ runs from Thursday, July 20 through Sunday, August 20, offering free outdoor activities that span from the Art Museum to Logan Circle. Shakespeare Park, in front of Parkway Central at 1901 Vine Street, will have a giant chess set and giant Lego blocks for play. To keep cool (and to be cool), you can grab a Dream Pop—a 3D-printed superfood popsicle crafted by a team of foodies including a three-star Michelin chef—from a food cart during jazz performances and storytimes

Philadelphia’s newest jazz voices will perform in the space on Thursdays for a span of five weeks, beginning Thursday, July 20, from 5:00 to 6:30 p.m. The performance schedule is as follows:

On Saturdays, the Parkway Central Children’s Department will host storytimes in the park from 11:00 a.m. to 1:00 p.m., featuring tall tales, colorful characters, and wild adventures. Storytellers from the Parkway Central Library Children’s Department and Keepers of the Culture will present these interactive storytimes for all ages, followed by craft activities. Beginning July 23, Sundays will bring StoryUP!—a team of improv performers that targets creativity and literacy skills—to the park for interactive shows at 11:00 a.m. These shows, based on ideas and stories from the child audience, run approximately 45 minutes to an hour and are recommended for ages 3 to 12.

The park will also showcase Revolution Shakespeare’s performance of Julius Caesar: A Live Radio Play on August 19 at 6:30 p.m. This production, free and open to the public, is a pared down version of William Shakespeare’s historical play; it was originally edited and directed by Orson Welles, cut down to emphasize the political aspects of the play.

There is fun for everyone! For more information about Oval+ programming, visit theovalphl.org.

The Free Library thanks the Knight Foundation for their support of its Oval+ activities in Shakespeare Park. 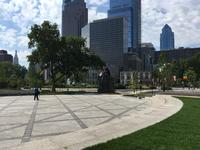