Our Spring 2018 Author Events Series Is Full of Fire and Fury!

A week from today, in what is sure to be one of our more interesting Author Events to ever take place at the Free Library, we welcome Michael Wolff and his hot new book which details the Trump administration, Fire and Fury. The book was just published and it's already generating international headlines.

The Free Library will be the first stop on this exclusive book tour, so plan ahead and get here early to secure a seat for this free event on Tuesday, January 16, 2018 at 7:30 p.m. at Parkway Central Library (lines form at 6:45 p.m.)

In the meantime, here's a crash course on how a book that no one really knew about until a week ago ignited so much fervor from all sides of the political and media spectrum.

Who is Michael Wolff?
Wolff is a media columnist and author, writing for such publications as the The Hollywood Reporter and The Guardian, as well as penning previous books on subjects such as the Dot-com bubble, the new age of television, and political news media moguls like Robert Murdoch. Wolff was able to apparently gain regular and somewhat unlimited access to the White House after telling President Trump that he was interested in writing a book about the new administration shortly after the election.

Where did the title of the book come from?
The title is based on a direct quote from Trump, as he stated that North Korea "will be met with fire and fury like the world has never seen" if they continue making nuclear "threats."

What is the book about?
Fire and Fury: Inside the Trump White House is reportedly based on more than 200 interviews with members of Trump’s administration, including senior White House staff members, according to The Guardian, which was the first outlet to publish details from the explosive book on January 3. Some topics and revelations within the book include:

Where can I get a copy to read?
Well, that's a bit tricky right now. 200,000 physical copies of the book's first printing sold out instantly! Amazon's current top three sellers are respectively Fire and Fury’s hardcover edition, its Kindle edition, and at No. 3, the Audible audio edition (which just happens to be almost 12 hours long!). Anyone can pre-order the hardcover version of Fire and Fury via Amazon and other online retailers, but it won’t ship for "two to four weeks" according to their websites.

The demand for the book at libraries has been likened to the release of a new Harry Potter novel.

As for the book's availability at Free Library, there have been over 1200 holds and counting placed on Fire and Fury from library card holders eager to read the book. We have hard copy books on order, however vendors nationwide are facing backorders. We expect to have books available by February at the latest and in the meantime, we have added additional ebooks on Overdrive and the audiobook version on RBDigital accessible through our online catalog.

One of the few places the book will be immediately available for purchase is at our Author Event, but in limited quantities. As always, your best bet is to get here early as it is first come, first seated (and first chance to buy a copy of the book)! 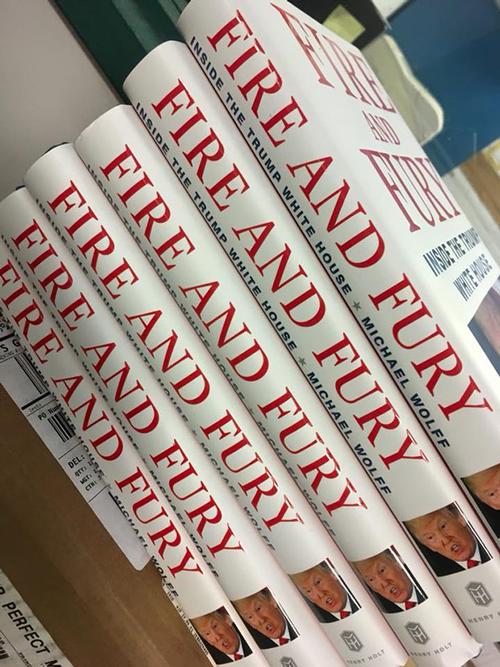 What has been Trump's and his administration's reaction to the book?
Among other quotes, Trump has stated that "Michael Wolff is a total loser who made up stories in order to sell this really boring and untruthful book." 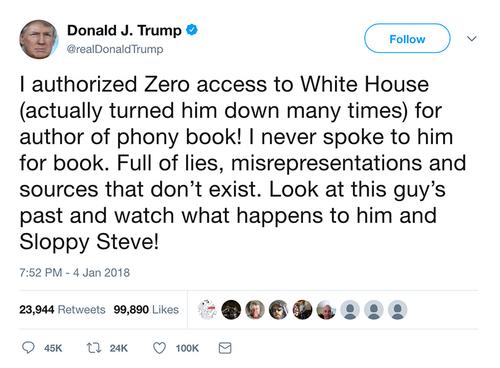 Cease and Desist letters have been sent from Trump's personal attorney to Steve Bannon, as well as the book's publisher, threatening them with lawsuits alleging that Fire and Fury's contents are libelous, defamatory, and an infringement on Trump's privacy.

The legal team for Wolff and Henry Holt and Company, the Macmillan imprint that published Fire and Fury, has responded to the Cease and Desist. 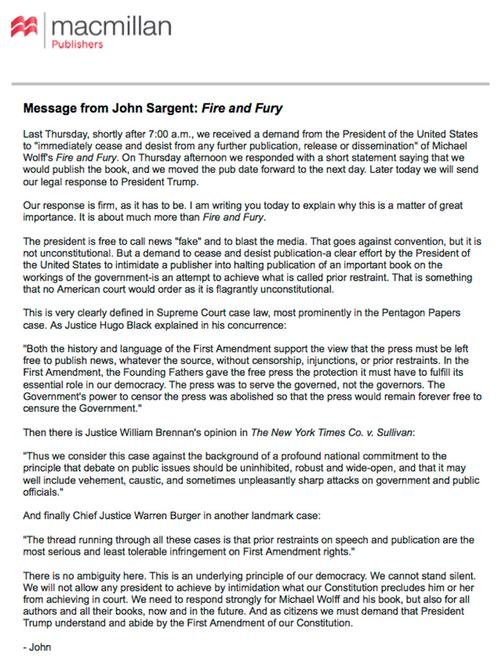 So, are any of the quotes and accusations in the book true or is this just more "Fake News"?
It would seem so according to Wolff, who has stated that he has actual tapes of the conversations and interviews he conducted. However, some journalists and news media have done their own fact-checking in regards to the book's content, with Wolff's reporting coming into question in some instances.

So, the question remains, is Wolff a media savior pulling back the curtain on a political scandal or just another culture vulture looking to make a quick buck?

Now that you're up to speed, we hope to see you at this news-making event next week to make a decision for yourself! If we run out of available seating in our auditorium during the event, we will have multiple in-house simulcasts and spill-over seating available. If you are unable to attend, besides our usual podcast archive, we will also be Livestreaming the event!

Michael Wolff will speak with WHYY political columnist Dick Polman on Tuesday, January 16, 2018, 7:30 p.m. at Parkway Central Library. In this exclusive interview and public appearance, Wolff will discuss his explosive new tell-all, behind-the-scenes book on the daily chaos, backstabbing, and discord of the volatile Trump administration.

Michael Wolff's new bombshell book about the Trump administration, Fire and Fury, kicks off our Spring 2018 Author Events series.
1 Comment | Add a Comment
This book is nothing more than a smear job, which will be read by hateful, misinformed people. Wolff, a fiction writer, has said repeatedly he never met anyone on Trump's WH staff. The book is garbage and a work of fiction. It's a shame our taxpayer money is being flushed away on allowing people access to this smear job.
This