This year's additions to the National Recording Registry were announced last month, which include 25 songs, albums, or audio recordings from the early 20th century up to the present. This year's selections bring the total number of recordings in the registry to 500!

What is the National Recording Registry, you ask? Similar in scope to the National Film Registry (of which we have written about in past blog posts), it is the Library of Congress' program which preserves an ever-expanding list of sound recordings deemed "culturally, historically, or aesthetically significant."

And this year's inductees, which include pop hits, groundbreaking albums, and historical recordings, are...
(in Chronological Order)

Here is some selected trivia to go along with some of this year's aural treasures:

Between the following catalog list and the Spotify playlist below, you can listen to all of the newly registered songs.

What audio recordings do you think should be included in future installments? Let us know in the comments! 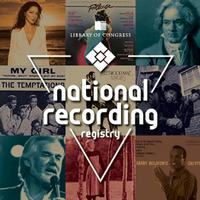