Updates From the Manuscripts of the Muslim World Project

Philadelphians and people worldwide will eventually be able to view and download entire Islamic manuscripts, consisting of both images and texts, from the Free Library of Philadelphia’s Islamic collection of manuscripts. Already, this project has garnered much excitement. This past summer, Rare Book School held a class on Islamic Manuscripts in the Rare Book Department, introducing students to these Islamic manuscripts and letting them explore such topics as history, calligraphy, illumination, illustration, and bindings.

Part of the digitization effort requires the preservation of manuscripts. This involves a series of steps that must be taken before a manuscript is ready to be digitized. Talented conservators from the Free Library’s Collection Care Department review a manuscript’s condition and suggest repairs when needed to protect it during the digitization process.

The Free Library of Philadelphia is currently digitizing about 100 of its Islamic manuscripts and over 800 paintings. It’s part of a three year grant funded project awarded by the Council on Library and Information Resources (CLIR) and part of their Digitizing Hidden Collections grant made possible by The Andrew W. Mellon Foundation. In this project, The Free Library, Columbia University, the University of Pennsylvania, Bryn Mawr College, and Haverford College will catalog, digitize, and publish online more than 500 of their manuscripts.

Stay tuned for exciting programming surrounding this digitization project and for additional updates here on the blog! 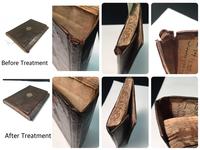