The Final Word with Jill Lepore

A historian whose "discipline is worthy of a first-class detective" (New York Review of Books), Jill Lepore is the author of the National Book Award finalist Book of Ages, the story of Benjamin Franklin’s beloved but often-overlooked sister, Jane; New York Burning, winner of the Anisfield-Wolf Award and a finalist for the Pulitzer Prize; and The Secret History of Wonder Woman, the revealing feminist origin story of one of the most popular superheroes of all time. Her new book—These Truths: A History of the United States—is an ambitious biography of America as told through the intersection of politics, technology, journalism, and sketches of greater- and lesser-known leaders, mischief-makers, and visionaries.

What role have libraries played in your life? What role do you think they play in our 21st-century world?
I’m writing from a library right now! My office this year is deep inside the stacks of Harvard’s Widener Library and I find it hard ever to leave the library. When I was a kid, I could walk from my house to our town library, a little Carnegie building called the Beaman Memorial Library. It had a kids’ section in the basement. I once got so obsessed with the weirdness of the "children’s room" that I went on a research bender on a story for The New Yorker—"The Lion and the Mouse"—about the creation of children’s rooms and the astonishing story of how the first children’s librarian tried to suppress E. B. White’s 1945 book, Stuart Little. I guess, don’t get me started on libraries; I’ll never stop.

These Truths is subtiitled A History of the United States. What long-term, pervading characteristics of our society are front and center in American culture and politics today? Are new currents—or "truths"—emerging?
The book is pretty squarely a political and intellectual history. It’s a history of the ideas, political practices, and democratic institutions of the United States. The truths it concerns itself with are "these truths" of the Declaration of Independence: political equality, natural rights, and the sovereignty of the people. The first part of the book looks at the origins of these ideas, and the rest of it asks, does American history prove them, or belie them? Does it deliver on them, or does it betray them?

Your writing explores and reveals "absences and assymmetries"—omissions, overemphasis, underemphasis—in what we've long accepted as "official" history. What's a key absence or assymetry addressed in these truths?
I’ve been fascinated for a long time by the gap between academic research in American history and American history in the popular imagination. A lot of historians have been fascinated—and troubled—by this gap, for a long time, of course. But I got especially interested in it when the Tea Party movement emerged, early in 2009, when I happened to be teaching a course on the American Revolution. I’d teach my students in the afternoon and go home and watch Tea Party rallies on television, and then I started going to those rallies, and talking to people. There’s a lot to draw inspiration from, about events of the 18th century. But there’s a lot of horror and misery in that century, too—the atrocity of slavery, the grief of mothers losing most of their children in infancy, the brutality of conquest, all of which have been richly investigated by scholars, but that just don’t make it into the popular imagination. I tried to get at some of that in a book I wrote a few years ago, Book of Ages, about the life of Benjamin Franklin’s sister, Jane. His life was rags to riches, hers was rags to rags. That asymmetry—the absence of lives like hers from any popular understanding of the American Revolution—struck me as important to address, and try to remedy. These Truths is an attempt to do that for the whole run of American history.

To you, the Free Library of Philadelphia is also the "Free Library of ________". Why?
The world. Every library is a door that opens not inward but outward, from you, to the world, present, and past.

This article originally appeared in the Fall 2018 edition of our magazine, Off the Shelf, a biannual publication with news and features from the Free Library. You can check out current and archived issues of Off the Shelf on the Publications section of our website, as well as back issues of Hidden Gems—a former special collections periodical that is now part of Off the Shelf. 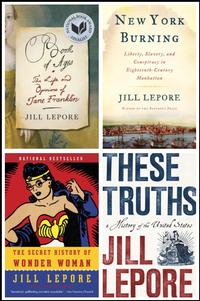