It's That Time of Year Again... Free Comic Book Day!

This spring and summer are shaping up to be a great time for readers and fans of all things related to comic books!

As I'm sure you know and have been bombarded with ads, reviews, and non-spoilered and spoilered reactions now for a week, the be-all-end-all comic book superhero movie Avengers: Endgame debuted in thousands upon thousands of theaters across the world and raked in a gazillion dollars. The movie also marked the unofficial begin to the summer movie blockbuster season which has already seen superhero appearances from Captain Marvel, Shazam, and Hellboy, and let's not forget M. Night Shyamalan's unusual superhero trilogy with a twist final act, Glass. The rest of this summer will see other comic book movie entries from the likes of Spider-Man, X-Men, New Mutants, and even an evil take on Superman (Brightburn).

This year also happens to mark the 80th anniversaries for one legendary superhero and one comic book institution: Batman and Marvel Comics, respectively. Starting this Saturday and extending throughout next week and weekend, select theaters will even be screening the original Batman quadrilogy (Batman, Batman Returns, Batman Forever, and Batman and Robin)... that is, when Avengers: Endgame is hogging all the other screen time at multiplexes.

But perhaps the biggest event (yes, even bigger than Avengers: Endgame!) is happening this Saturday—a day I look forward to every year—Free Comic Book Day!

This year's lineup of free comic books is full of fan favorites like Teenage Mutant Ninja Turtles, Spongebob Squarepants, and Star Wars—which is a nice coincidence, since Free Comic Book Day just so happens to fall on May the 4th (Be With You) this year. Some indie comic selections featured are Lumberjanes, The Tick, and a special preview of the next collection of My Favorite Thing Is Monsters. And yes, there will even be a free Avengers comic book, natch!

Philly has some great comic book shops around the city including Amalgam Comics and Coffeehouse, Brave New Worlds, South Street mainstay Atomic City Comics, and one of the longest-running shops around (since 1976!) Fat Jack's Comic Crypt. All of these stores will be participating in Free Comic Book Day and usually also have special guests, local artists, cosplay, and deals on books and collectibles for all ages. Not only do you get to pick up some cool new comics but you are also supporting local businesses!

And the fun doesn't have to stop once you've read through all those great comic books you just picked up this weekend because every day is free comic book day at Free Library! I highly recommend you stop by Parkway Central Library and check out our new Teen Center, which is filled to the brim with new graphic novels, comics, and manga, plus plenty of great seating areas to chill out and read! 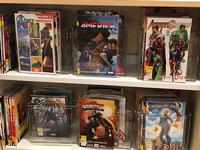 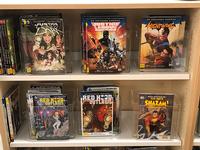 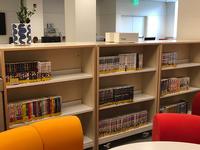 You can also browse through our catalog 24/7 to find more great reads from superheroes and comic strips to graphic novel memoirs and more diverse character voices as well. Check out our Explore topic dedicated to Comics and Graphic Novels for great booklists and web resources full of character(s), both human and superhuman. And don't forget the great collections of current and classic comic series on Hoopla, one of our most popular Digital Media resources, where you can stream comics in both single issue and graphic novel formats to your browser or download comics for offline viewing using Amazon, Android, or iOS mobile apps. All you need to access all this cool comics content—for free—is your library card!

Lastly, don't forget to get your free ticket for our annual Comic Con, taking place on Saturday, May 11 at Parkway Central Library!

Both Batman and Marvel Comics are celebrating 80th anniversaries in 2019

DC and Marvel Comics go head to head just in time for our 5th annual Comic Con!
Add a Comment