We’re having a really exciting Author Event on the evening of Thursday, July 25 where the topics of discussion will be Trans Writers, Kids, and Books! Lambda and Stonewall Award-winning author Kacen Callender (Hurricane Child, This Is Kind of an Epic Love Story, and the forthcoming King and the Dragonflies and Felix Ever After) and picture book author Kyle Lukoff (A Storytelling of Ravens and When Aidan Became a Brother) will read from their work and talk about their approach to queer and trans literature for young people. I got the opportunity to ask Kyle a few questions before the event, and hope to speak with Kacen after the event for a separate blog post.

What was one of your favorite books as a child? Did you see yourself in any of the characters?
"Favorite book" has always been an impossible question to answer. But when I was in sixth or seventh grade, I became obsessed over Lucy Grealy's memoir of surviving cancer and several facial reconstructive surgeries, called Autobiography of a Face. It was certainly not for young readers, but something about her dissociation from her body, her experience of the body as a site of confusion and pain and trauma, felt relevant in ways I couldn't put into words, and in fact only realized in thinking about the answer to this question.

Similarly, I don't know what it means to "see myself" in a character. I was a weird, unpleasant, possibly precocious child, with wholly unrealized gender and sexuality feelings, and a Jewish kid in an overwhelmingly Christian, casually anti-Semitic part of the country. So when I read books about weird kids who liked to read, books with unintentionally queer subtext, kids who had a hard time making friends, and characters who felt sad for reasons they couldn't articulate, I recognized those parts of myself in them, but didn't know what to do with it.

How did your journey lead you to writing trans narratives for children?
I got hired at Barnes and Noble when I was 16, worked there in the summers through college (and during the school year had a work-study gig in the library), dropped out of law school, had a terrible job at a translation company, and then went back to B&N before starting library school. I just turned 35, so that means I've been in this field for almost 20 years. Books have always been the center around which my life orbits, and writing feels like a natural outcropping of that. Once I started working as a librarian, and reviewing books for trade publications, and having more of a voice in literary circles, it seemed inevitable that someday my name would be on a book jacket. Which isn't to say I'm not still shocked, and grateful, and sometimes overwhelmed by how surreal it feels, but I think on some level I always knew that I'd be a writer.

What was most surprising aspect of the publishing process?
There was a certain degree of magical thinking involved when I first got started. I thought that once I got a book published I would be transported to the land of Author, where I could introduce myself at parties as a writer and not feel like I was lying. My publisher would set up a glamorous international book tour, and I would never be sad again, because I was a published author and that's what happens. Instead, I found that I still introduce myself as a librarian and feel embarrassed every time a friend is like "he's also a writer," I do a lot of my own event planning, and I'm still sad sometimes. So basically, I'm surprised that I'm still my same essential self, but I mostly like myself so that's okay.

Are there any books you want to recommend?
Read Meredith Russo's Birthday. And Daniel Ortberg's THE MERRY SPINSTER. And everything by Jason Reynolds. And DAMSEL by Elana Arnold. And ALLEGEDLY by Tiffany Jackson. And THE ASTONISHING COLOR OF AFTER by Emily X.R. Pan. I could keep going forever (I'm a librarian after all), but I'm writing this on my first day of vacation so I'll stop there.

Is there anything else you’d like to add?
People often ask if Aidan's character is based on what I was like as a kid, but when I was little I didn't want to be a boy; I wanted to be Dorothy Gale, from Kansas.

A Conversation about Trans Writers, Kids, and Books will take place on Thursday, July 25 at 5:30 p.m. in the Children's Department at Parkway Central Library. This is a free event. 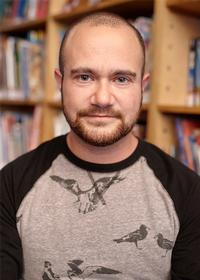 A Conversation about Trans Writers, Kids, and Books will take place on Thursday, July 25 at 5:30 p.m. in the Children's Department at Parkway Central Library. This is a free event.