Yeah, it’s a bit of a bummer that summer is drawing to a close, but there are a few upsides: in addition to it not being a million degrees every day, we’re getting closer to the fall season of Free Library Author Events. And what a line-up! Let’s take a brisk autumn stroll (use your imagination) through a few talks we’re really excited for...

First off, we’re happy to announce that this fall we’re featuring more than our usual one or two books by musicians. That’s right, we’re hosting events with four, count ‘em FOUR, musical icons!

First up, English folk-punk icon Billy Bragg. You really can’t get much better than this song:

Also a longtime left-wing activist and provocateur (seriously, look him up), Bragg will be here on Monday, September 23 discussing The Three Dimensions of Freedom, in which he prescribes liberty, equality, and accountability as the antidote to rising global authoritarianism.

Okay, this next one is HUGE—On Tuesday, October 8, the tide is high and we’re so, SO excited to host Blondie frontwoman/actor/style icon/all-around uber-celebrity Debbie Harry and Face It, a memoir populated with the likes of William S. Burroughs, John Waters (also a good friend of our Author Events series), and David Bowie. But one of her celebrity friends clearly towers above them all: Here she is in a ribbeting, er, riveting, duet with one of the world’s great entertainers.

It’s important to note that due to the anticipated demand for this event, we’ll be hosting Ms. Harry at the Annenberg Center for the Performing Arts, aka West Philly’s answer to Radio City Music Hall.

Next up, we’re incredibly honored/psyched to welcome Patti Smith back to our stage (except again, due to anticipated demand, we’ll once again be hosting this event at the Annenberg Center for the Performing Arts) on Monday, October 21. Pretty torn here. We could link to literally hundreds (thousands?!) of amazing musical performances, readings, and Nobel Prize ceremony appearances featuring this incomparable artist, but you’ve seen all those, right? Maybe you haven’t seen this one. Good advice for any young artists. Or for old artists. Or for pretty much any human being who wants to do good work.

Ms. Smith will join us to discuss her newest book Year of the Monkey, a meditation on loss, politics, and aging, wrought from a solitary sojourn through Northern California and other more metaphysical landscapes.

And finally in this musical motif, we’re welcoming Rock and Roll Hall of Famer, songwriter, producer, arranger, and multi-instrumentalist Booker T. Jones! In addition to founding the legendary Booker T. & the M.G.’s, collaborating with the likes of Otis Redding, Neil Young, and Wilson Pickett, essentially creating what became known as the "Memphis soul sound", and receiving a Grammy Award for Lifetime Achievement, he recorded one of the greatest ear worms of all time:

Now that you've got that tune in your head for the next week, read on! Jones will be here on Wednesday, October 30 with Time Is Tight, a memoir of his five decades in music, his early years in the Jim Crow South, and his relationships with some of history’s great music makers.

One of our favorite aspects of this upcoming season is that there are some really cool themes and threads running through our schedule, so we’re going to break these down into more than one blog post. Stay tuned for more to come...

Tickets go on sale Monday, September 9 at 10:00 a.m. for the fall season of Free Library Author Events. Subscriptions will be available for purchase Friday, September 6 at 10:00 a.m. For more information on our entire fall schedule, visit freelibrary.org/authorevents, as well as our Instagram, Twitter, and Facebook pages. 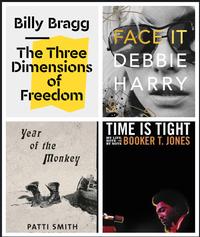 What a musical line-up for our Fall 2019 Author Events!
Add a Comment