It’s Giving Tuesday! Celebrated on the Tuesday after all of the chaos of Thanksgiving, Black Friday, and Cyber Monday, Giving Tuesday is a time to step back from consumerism and deals. It’s a day where everyone rallies to support their community and gives to causes that mean the most to them.

Did you know that Giving Tuesday was first conceived less than a decade ago? It was launched back in 2012, when the 92nd Street Y in New York City and the United Nations Foundation in Washington, D.C. came together and decided to celebrate the idea of generous giving and philanthropy during the holiday season. With buy-in from many corporate and nonprofit leaders quickly joining, and with the help of social media (and the hashtag #GivingTuesday), the day was a huge success. The 2,500 nonprofit organizations that participated in that inaugural Giving Tuesday raised $10.1 million that day!

Since then, Giving Tuesday has continued to grow as more and more nonprofit organizations, corporations, and individuals get involved each year. Last year, organizations raised over $380 million in the United States on this global giving day and supporters contributed 3.6 million donations.

Did you also know that the Free Library participates in Giving Tuesday? While the City of Philadelphia provides for the Free Library's facilities and infrastructure, nearly a third of our annual budget relies on private support for public programs, from generous individuals like you!

So, how can you get involved with Giving Tuesday at the Free Library this year? Make a tax deductible gift to the Free Library of Philadelphia, and tell your friends and family about #GivingTuesday—share the message with everyone you know!

We hope that you’ll support the Free Library on this Giving Tuesday to support your neighbors and community. 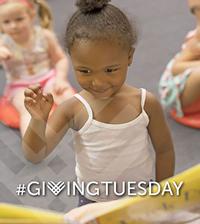 Giving Tuesday is a great start to the holiday giving season!
Since its start in 2012, Giving Tuesday has become a global giving movement.
Add a Comment