"The wound that was made when white people came and took all that they took has never healed. An unattended wound gets infected. Becomes a new kind of wound like the history of what actually happened became a new kind of history. All these stories that we haven’t been telling all this time, that we haven’t been listening to, are just part of what we need to heal. Not that we’re broken. And don’t make the mistake of calling us resilient. To not have been destroyed, to not have given up, to have survived is no badge of honor." (Tommy Orange, There There, page 137)

"But now I saw the kitchen—that sunny space from my childhood that I thought I was saving, preserving, protecting from the rez dogs—was an eternal source of mortification for my ma. She knew even more than I did, what the house had looked like in its prime, and now she was cooking the literal ruins of the house she grew up in." (If I Ever Get Out of Here, pages 318-319)

"When we were your age, at home in our community being with family was the most important thing. We played with each other, did chores together, and shared everything. But at the school I went to, far away from home, they wouldn’t let us be together. My brother and I were separated like day and night." (David A. Robertson, When We Were Alone)

Intergenerational trauma (also referred to as inherited trauma) is an opaque term but basically there are two theories. One, that trauma changes your genetic structure and those permutations can be passed down and written into the genetic code of the children of trauma survivors. The research is still developing on this and even understanding what this means requires a more nuanced familiarity with genetics in general. There have been studies on the children of holocaust survivors, but the issue researchers have run into is that it is hard to tell to what degree these shifts are the results of genetics alone, or the result of being raised with a person who or living in a community that has experienced a significant and serious trauma.

The second theory of intergenerational trauma which is more pertinent to these stories is that intergenerational trauma is defined as, "the transmission of historical oppression and its negative consequences across generations."  This second type often has to do with systemic or structural trauma which is ongoing. In the Tommy Orange quote, we have this wounding (etymologically speaking, trauma is from the Greek word for "wound"), and the compounding of that wound in that it is not allowed to breathe but is covered over and we are now living with the consequences of both an initial trauma and the trauma of the ongoing infection.

The characters in There There and If I Ever Get out Of Here are in webs of inherited trauma and ongoing trauma that is a consequence of systemic issues such as erasure, poverty, loss of land, identity, language, culture, and being in the proximity to people who are still suffering as a result of their trauma. Because of this, Tommy Orange often gets a lot of comments that his book is "devastating", as well as getting a lot of questions about healing or social justice.

I think the message of the above quote is that healing is premature. A focus on healing might be just another form of covering up what happened and dismissing what continues to happen. Healing can only happen after airing out the wound, a time sitting with the discomfort of that wound, and I think this discomfort is especially pointed for white readers. It requires a state that public intellectual George Yancy refers to as un-sutured. He states, "Today is white America’s time to weep, to become vulnerable, and un-suture itself, which means, for me, a process of suffering oneself to be seen, of remaining wounded." For this claim, Dr. Yancy received an extraordinary amount of pushback including death threats and threats of physical violence.

In my reading, Tommy Orange offers an analogous invitation through There There’s focus on storytelling—not just in the importance that the stories are told, but that when they are heard can render the reader empathetically vulnerable. The trauma described in There There is distressing, but it is also beautifully specific. This specificity of someone else’s story and experience can be read as a challenge to the reader—to let it be what it is, to sit with it and the discomfort it causes without trying to appropriate it or compare it to the reader’s own experience, to react defensively, or to try and heal or fix the trauma that the book represents. The word trauma seems both the most and least applicable term, in that what is happening in the book and through the book is a glimmer of an understanding of some of the ways we intimately wound each other—often unintentionally—and in the book this wounding is frequently mixed with love and care. These wounds have their own momentum as they ricochet between us and their own inscriptive lines of inheritance as they pass from generation to generation. 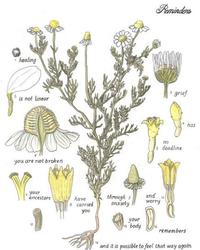 Image by Fabian Romero, words by Texta Queen
Illustration by Julie Flett from When We Were Alone
Add a Comment