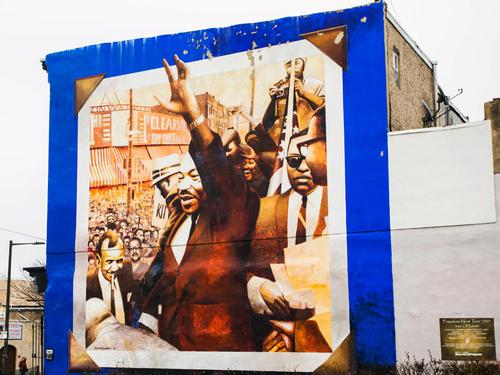 Dr. Martin Luther King, Jr. stands with one arm stretched high above his head, waving to the crowd, with a broad smile on his face, as the legendary Philadelphia civil rights attorney and firebrand Cecil B. Moore stands to one side in the background and King's long-time friend and mentor, Rev. Ralph Abernathy stands to the other. They are all frozen in a timeless moment on a mural bordered in vibrant cobalt blue, on a wall where Lancaster Avenue, Powelton Avenue, and 40th Street converge in West Philadelphia.

The mural commemorates the spot where on August 3, 1965, Dr. King addressed a throng of hopeful Philadelphians determined to see the end of segregation and discrimination in America, and the integration of Girard College, a boarding school for fatherless and orphaned boys located at 2101 South College Avenue in North Philadelphia. Dr. King had visited the picket line at Girard College earlier that day. Both events had heavy police and press presence. Video exists of KYW-TV3's coverage by a very young Tom Snyder before his days as a legendary chain-smoking, leisure-suit wearing, talk-show host in the 1970s and 1980s.

As the president of the Philadelphia NAACP (National Asociation for the Advancement of Colored People) at the time, Cecil B. Moore had been the catalyst for the non-stop picketing outside Girard College that had begun in May of 1965. When he declared that it was time Girard College defied Stephen Girard's discriminatory will and open its doors to people of color, he was met with massive local support, strong enough to bring Martin Luther King, Jr. to Philadelphia. This event was commemorated in a photo that is included in our Digital Print and Picture Collection. Moore's methods had often been criticized as too showy and militant, and there was some tension in the air, as I recall, because of the fear that Moore might offend the more laid-back Martin Luther King, Jr. who had quietly stolen Cecil B. Moore's thunder. 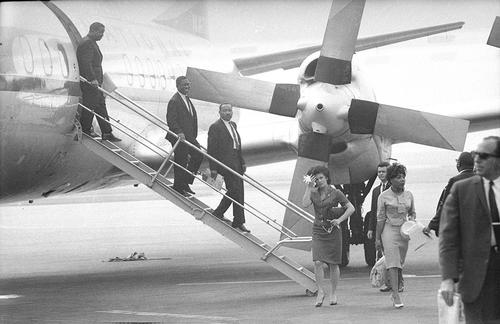 That August day in 1965 was as hot as summer can be, with the unrelenting Philly humidity that makes residents feel like they're walking underwater. I was fifteen years old, a freshman at West Philadelphia High, and somewhere beyond the frame of that mural, in a sea of people from all racial and ethnic backgrounds, all ages and all political persuasions, I am wedged in that crowd basking in Martin Luther King's smile. I remember we sang, "This Little Light of Mine".

This was a huge day for me. I had tried unsuccessfully at the age of 13 to board a bus and participate in the March on Washington, but my mother and grandmother put a stop to all that. I had to be content to watch it on television. I was fired up even more by Dr. King's immortal "I have a dream" speech. Two years later, I had joined the Student Non-Violent Coordinating Committee (SNCC) and Students for a Democratic Society (SDS). On April 7, 1965, I marched on Washington, with 25,000 others, in protest of the war that the United States was waging against North Vietnam.

It was inevitable that I would heed the call of activism. My mother's half-Irish father was a supporter of Jamaican philosopher Marcus Garvey's Black Nationalist movement. When forced into segregated seating in a Center City movie theatre, my maternal grandfather brought his own movie theatre in, and for his community, where people could sit where they wanted. My father's father had graduated from Tuskegee Institute in Alabama (now Tuskegee University). One of his teachers was George Washington Carver, who became my paternal grandfather's mentor and frequent houseguest after my grandfather had moved to Philadelphia. My paternal grandfather would also go on to write a biography of Dr. Carver entitled, From Captivity to Fame: Or The Life of George Washington Carver.

I would listen to my paternal grandfather's stories about Booker T. Washington and other African-American pioneers he admired, all the while admiring him because of all he had accomplished during a time of deep discrimination against people of color in this country, including graduating in 1926 from Drexel Institute of Technology (now Drexel University) and owning and operating his own successful business. One of the stories I and many of my peers heard from their parents and grandparents was the story of millionaire financier, Stephen Girard, and the legendary Haitian General and revolutionary, Toussaint Louverture. This story has a life of its own. Although there are no documents or historical records of any kind in existence to substantiate that it ever happened, the story of Stephen Girard and Toussaint Louverture has been passed down through generations of Philadelphia's African-American community as an infuriating, cautionary tale, which fuels a certain sense of mistrust even to this day.

Louverture was a Black French national, who lead the first successful Black revolt against slaveholders and colonialism in 1791, establishing Haiti as a de facto self-governing colony.  According to the story, Stephen Girard, (born Etienne Girard)  in the early part of his career, followed in his father's footsteps, becoming the Captain of his own mercantile ship, trading goods between New Orleans and Port-au-Prince, Haiti. Girard had accompanied his father on similar voyages since he was a boy, and as a consequence developed long-standing personal relationships with many Haitians, Toussaint Louverture being one of them. Louverture anticipated arrest and imprisonment by Napolean Bonaparte's agents for his betrayal of allegiance to Bonaparte.

The rest is the stuff of legend: Louverture thought Captain Stephen Girard was the perfect person in whom to entrust the sizable war chest Louveture had accumulated, over the years, to sustain the revolution and the struggling colony of Haiti. In the end, it was Louverture who was betrayed by Girard who, as the story would have it, gave up his life as a ship's captain and mercantile trader, moved to Philadelphia and never returned the six-million in gold entrusted to him by Louverture. Toussaint Louverture was imprisoned and released after nine months; all his efforts to retrieve Haiti's gold proved unsuccessful. Stephen Girard went on to become so wealthy that he rescued the United States government from financial collapse after the War of 1812. The subject of Stephen Girard and Toussaint Louverture has been scrutinized by scholars yet still remains shrouded in mystery, but to many in Philadelphia's African-American community in 1965, the bitterness of the alleged betrayal of Louverture by Girard was like a fresh wound.

French expatriate, Philadelphia resident, naturalized American citizen, and philanthropist Stephen Girard (1750-1831) left a hefty bequest in his will for the establishment of a school for "poor white male orphans," from New Orleans, New York City, and Philadelphia. In his 39 page will, Girard designated the site of the college and its classic Greek architecture, which included a ten-foot-high stone wall around a 43-acre campus. During his speech outside Girard College in 1965, Martin Luther King said the wall around Girard College was "... like a Berlin Wall to keep America's colored children out." It was three years after Martin Luther King, Jr.'s visit to its wall and 120 years after Girard College first opened its doors, that the college was desegregated by order of the Supreme Court of the United States. Two African-American boys and two Asian-American boys were the first non-Whites to be admitted.

Girard Collge remained all-male until 1982 when it became co-ed. Eventually, the Girard College Admissions Board would expand the definition of "orphaned" to include children from single-parent heads of households. Martin Luther King, Jr. would not have been allowed on the campus of Girard College while leading the protest outside its walls in 1965, not because he was Black, but because he was a clergyman and Stephen Girard's will strictly prohibited clergy from entering the grounds of Girard College. That too changed in the 1980s.

For the past twenty-five years, Girard College has been the signature site and hub of the Greater Philadelphia MLK (Martin Luther King) Day of Service. It is the largest volunteer and civic engagement event commemorating Dr. King's birthday in the United States. The event is sponsored by Global Citizen, a nonprofit, non-partisan organization based in Philadelphia that is dedicated to democracy building and civic engagement, urging citizens to "Think Globally. Act Locally."

It's been a long time since I stood, shoulder to shoulder, with my fellow Philadelphians in the August heat to protest discrimination at Girard College and listen to inspiring speeches by Cecil B. Moore and Martin Luther, King Jr., but I'm on the Global Citizen mailing list and I always manage to participate in at least one of their events a year. I always feel better afterward.

Find out more about the upcoming Greater Philadelphia MLK Day of Service on Monday, January 20!

Anyone interested in exploring further the lives of Dr. Martin Luther King Jr., Stephen Girard, or Toussaint L'Ouverture can research these extraordinary men in detail by using our Biography in Context database.

Interested in finding more pictures of Dr. King in Philadelphia? Search through our Digital Collections! 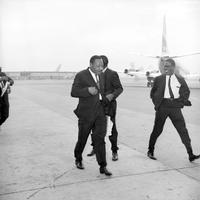 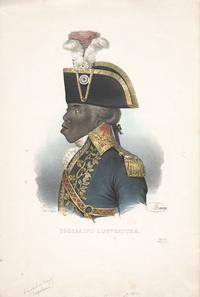 Toussaint L'Ouverture, from our Digital Collections https://libwww.freelibrary.org/digital/item/55611
2 Comments | Add a Comment
Wonderful article. One thing though, the US wasn't "waging war against North Vietnam", they were providing military assistance to the South Vietnam force--and this was in 1965 before the war had escalated to the warrant of calling it "wagaing a war".
India - Philadelphia
It's very satisfying to see this vintage footage of the protest led by MLK Jr. My Grandmother participated in the integration demonstrations outside of the campus. I am an alumni of Girard College. I was able to attend the school not only because of these efforts during the Civil Rights Movement but also because the community put pressure on the school to become co-ed in the 90's.
Melissa - Philadelphia