One Book Food and Community Conversation

On February 11, the Culinary Literacy Center and One Book will bring together panelists who reflect a range of involvement in Philadelphia’s commitment to economic justice, food education and land sovereignty, and cultural foodways and traditions.

We’ll hear from Jena Annise (J.A.) Harris, a Black, Queer, Femme, Chef and Organizer who brings her love of a shared meal together with social justice work through the projects foodeveryonedeserves (f.e.d.), the Free Breakfast Program, and Wholistic Art's Free Brunch Program; Hannah Holby, a farmer and educator at Henry’s got crops, the farm that works with W.B. Saul High School of Agricultural Sciences; Laura Lagunez, Natives at Penn advisor and a Public Health graduate student of Navajo and Nahua Mexican ancestry who works to bridge cultural narratives with the public health sector; and Toyce Holmes (Muscogee/Creek Nation), the program coordinator for Penn's First-Generation, Low-Income Center.

Philadelphia is a city with a wealth of urban farms and gardens, with communities working together on issues of food access and economic justice. Some of those farms and gardens are part of a recent trend towards urban agriculture, but others have existed for decades. Similarly, Philadelphians actively fight to preserve and share cultural foodways, and against the gentrification that threatens our unique food and community diversity.

In preparation for the upcoming panel, I combed through There There for every reference to food. Individually the passages were not revelatory: as a child Opal enjoys the Wonder Bread and butter and a watery beef stew on the first night her family joins the Occupation of Alcatraz. Orvil, who Opal is raising, recounts finding his mother overdosed in the kitchen when he goes in to make him and his brother sandwiches. Opal makes Orvil and his brothers 'traditional foods' such as 'frybread' but only on special occasions. She would give a disclaimer, "always sure to remind them that it’s not traditional, and that it comes from lacking resources and wanting comfort food" (There There  p.132). Read together, these passages resonate with underlying themes of food scarcity, economic justice, food education, land sovereignty, and cultural foodways and tradition (or the lack thereof).

Frybread is a captivating example. It is not a 'traditional Native American food' in any Native nation, but a delicious and comforting food made from the resources that were available on reservations. I think a lot of people look at something like frybread and think it is a metaphor about resilience and authenticity and survival, but food is always more complex than that. So are people. There is a tendency to read a book like There There and only focus on the generational trauma, oppression, ongoing harm, and the 'resilience' of Native American peoples. But this is, of course, the exact opposite of Orange’s message: "All these stories that we haven’t been telling all this time, that we haven’t been listening to, are just part of what we need to heal. Not that we’re broken. And don’t make the mistake of calling us resilient. To not have been destroyed, to not have given up, to have survived is no badge of honor. Would you call an attempted murder victim resilient?"

This tendency is easy, but what is harder is what Orange asks us to do: "If you were fortunate enough to be born into a family whose ancestors directly benefited from genocide and/or slavery, maybe you think the more you don’t know, the more innocent you can stay, which is a good incentive to not find out, to not look too deep, to walk carefully around the sleeping tiger. Look no further than your last name. Follow it back and you might find your line paved with gold, or beset with traps" (There There p. 139). I think what Tommy Orange is saying is that instead of rushing to obsessively catalogue the ongoing pain, harm, trauma, gentrification, and erasure of settler colonialism—or to say "yes, I too experience a similar oppression, erasure, etc"—is to do something more uncomfortable and unsettling: to look at our own legacies (or family or ignorance), ask how we may be contributing to these phenomena, and how we can use that unsettling feeling and admission to support more just and equitable relationships.

This panel is rich with activists, farmers, experts, and community advocates all finding creative and interesting answers to the questions of how we can enact food and economic justice with the land and within the food communities here, while also strengthening and supporting our local foodways. As daunting and depressing as the statistics are, I am heartened by the community engagement and response that exists in Philadelphia, and I’m looking forward to the conversation that the panelists will lead at Parkway Central Library.

[1] 26.2%: The percentage of single-race American Indian and Alaska Native people who were in poverty in 2016, the highest rate of any race group. For the nation as a whole, the poverty rate was 14.0 percent. In 2016, the year from which most of the data in this report stem, the poverty rate in Philadelphia was just under 26 percent. Statistics taken from the United States Census Bureau and The Pew Charitable Trust.

Join us at the Parkway Central Library on February 11 for an expert panel. 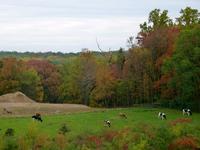 The farm at Saul High School
Add a Comment