As in the fall, all of these events will be virtual and held on Zoom. All events begin at 7:30 p.m. Most are free, and you can find all the information you need to register to view them on our website, freelibrary.org/authorevents. You can also watch almost all of these events archived on our YouTube channel and listen to them as audio podcasts.

Let’s check out some of the highlights from the season’s first few months!

George Saunders kicks off our season on Monday, January 18 with his newest book, A Swim in a Pond in the Rain, a master class on what makes fiction work, taught through the examples of four Russian geniuses. One of contemporary fiction’s most acclaimed authors, Saunders won the Man Booker Prize for Lincoln in the Bardo, a surreal tale of purgatorial ghosts and Abraham Lincoln. You can listen to him discuss it on our stage back in 2017 in the following podcast from our archives.

Celebrated by everyone from politicians to rock stars, here the author of the darkly surreal short story collections Pastoralia and CivilWarLand in Bad Decline discusses his work with Wilco mastermind Jeff Tweedy (a former Author Events guest we were lucky to host).

Next up, on Tuesday, January 19, we’re hosting Ijeoma Oluo and her newest book, Mediocre: The Dangerous Legacy of White Male America, an investigation of the costs and consequences of white male supremacy over the last 150 years of American history.

One of The Root’s 100 Most Influential African Americans in 2017, she has written for the Guardian, The Stranger, Time, and Elle, among other publications.

Here Oluo discusses this topic and her previous book, So You Want to Talk About Race, with Trevor Noah of The Daily Show (another previous Author Events guest).

"Look in your heart!" On Thursday, January 21, we’ll welcome legendary Irish actor Gabriel Byrne. You might know the Golden Globe winner from his portrayals of King Arthur, Satan, Pope Gregory X, Lord Byron, a heartless Irish-American gangster, a Viking chieftain, D’Artagnan the Musketeer, and an ersatz Keyser Söze, among hundreds of other screen and stage roles. Behind these films lies a life as interesting as any of the characters he’s portrayed.

On our virtual stage, he’ll present Walking with Ghosts, which traces his path as a boy wandering the outskirts of working-class Dublin, to his entrance and expulsion from the Catholic seminary, to his days in amateur theater that launched a 40-year career.

Salamishah Tillet will join us on Tuesday, January 26 to discuss her newest book, In Search of The Color Purple: The Story of an American Masterpiece. The author of Sites of Slavery, a contributing critic-at-large for the New York Times, the Henry Rutgers Professor of African American Studies and Creative Writing at Rutgers University-Newark, and cofounder of the Chicago-based arts nonprofit A Long Walk Home, her new book is an exploration of the impact of Alice Walker’s watershed 1982 book and the circumstances of its creation. Haven’t read The Color Purple since high school? What better time than now! And to familiarize you with Walker’s other work, check out the podcasts of her 1998 and 2013 appearances on our stage.

To also make you au courant with her work and thoughts on activism, watch this recent conversation between Tillet and John Legend.

On Thursday, February 18, we’ll be joined by Michael Eric Dyson to talk about his new book, Long Time Coming, a frank and urgent look at America’s reckoning with race. A longtime Author Events favorite returning guest (this will be his sixth appearance, after 2016’s The Black Presidency: Barack Obama and the Politics of Race in America), he is the author of the acclaimed Tears We Cannot Stop, as well as books about Barack Obama’s presidency, Hurricane Katrina, Jay-Z, and the effects of MLK’s assassination, among other wide-ranging topics. This event is a bit of a two-for-one, as he’ll be in conversation with Pulitzer Prize-winning historian and biographer Jon Meacham, also no stranger to the Free Library stage.

Here’s Dyson in a recent conversation with Stephen Colbert.

These are just a few of our upcoming virtual events! So throw a log on the fire and join us at home this winter for another season of author talks here at the Free Library of Philadelphia. 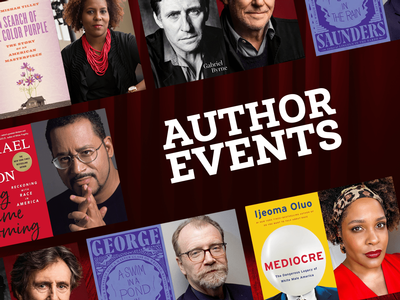