I Saw Philadelphia Through the Eyes of the Free Library

It was about this time last year that I met my husband for lunch at Reading Terminal Market. It was a particularly cold afternoon, so instead of making the walk, I drove. I passed Parkway Central Library first, of course, coming from my office on Hamilton Street. As I struggled to find parking, I ended up also passing the Independence Library and the Library for the Blind & Physically Handicapped.

In that moment, I had an idea: If I just saw three of our locations in 10 minutes, I wonder how long it would take to see all of them. Was it possible to do it in all in one day? What would that day be like? What would I learn on my way? Should I try? Has anyone done it before? Is that CRAZY?!

Fast forward to almost a year later, and I did it.

I teamed up with my husband, who happens to work in the video field, and was able to produce something professional looking—we had lights and everything! We chose Monday, October 3, a day that started off cloudy and damp but turned bright and warm, with enough sun at that time of year to get us through most of the libraries during daylight hours without being oppressively hot and sticky.

And off we went. 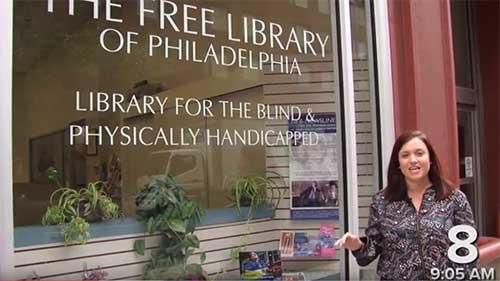 We set out from our home, all 54 neighborhood library locations plugged into a mapping program that had given us our "optimal" route—which, at times, didn’t make sense. We started at 7:30 a.m. at the Fumo Family Library on South Broad Street, before hitting a few of other South Philly and Center City library locations, expanding outward in what were essentially two big circles. We stopped at each library for no more than a minute or two. Particularly in the beginning, we were nervous that we wouldn’t be able to get to all of them if we didn’t hustle, even though the map estimated it would only take 7 hours (HA!!). If I knew an interesting fact about that particular library, I mentioned it on camera; otherwise, we documented where we were, got some shots of the surrounding area, and kept moving.

By the time we stopped for a lunch break in the Northeast, we had just visited the Bushrod Library, one of the few that my dad remembers visiting as a child. It was 1:00 p.m. by that point in the day and we had visited 25 of the 54 neighborhood library locations in five and a half hours. Despite getting tired and the temperature rising, we picked up our pace after lunch and by the time we reached the Greater Olney Library at 3:30 p.m.—with 19 libraries left to go—I was confident we were going to do it.

We closed out the day with visits to Kensington, McPherson Square, Richmond, and Fishtown libraries, and finally, Parkway Central. In all, it took 12 hours. I ran up the front steps at our 1901 Vine Street location in true Rocky fashion, just after 7:30 p.m. We drove 115 miles in total in my husband’s Ford Focus, but what will stick with me about this crazy journey isn’t merely the checklist I kept, marking off each library we saw as I grew ever more delirious. What I'll remember is that in one day, I saw every corner of our great city—many of which I had never seen before—and I saw it through the eyes of the Free Library. I think that’s amazing.

That’s the reason I really wanted to do this—to show that under the Free Library of Philadelphia umbrella and the guidance of our President and Executive Director Siobhan Reardon, the Free Library is set up to reach all Philadelphians. Sure, the neighborhoods are vastly different, have vastly different needs, and are made up of people from many different walks of life. It may feel, sometimes, like they don’t have anything in common at all. But they do. All 54 of those libraries operate with the same mission in mind: to advance literacy, guide learning, and inspire curiosity in the people that use them, whether they visit once or every single day. Visiting all of them in one day reminded me that maybe they’re not so different after all.

In the new year, we hope you’ll take the opportunity to visit Free Library locations you haven’t visited before! Hey, if I can see them all in one day, you can check a few off your list in a whole year! Get started now! 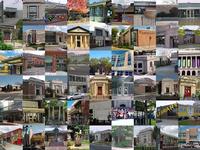