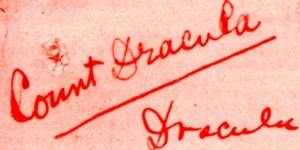 Every Sunday for 27 weeks, we’ll be having a live virtual conversation about Bram Stoker’s novel Dracula and highlight one chapter per week. The novel begins on May 3 and ends 27 weeks later on November 6. Join us for one program or all 27! Joining Edward G. Pettit of The Rosenbach will be a revolving set of co-hosts, all of whom have had a long history of reading, collecting, and creating with Stoker’s vampire. Register in advance to join this virtual program on Zoom and participate during the program.

The Rosenbach is the home of Bram Stoker’s Notes for Dracula, over 100 pages of outlines, early plot ideas, and research notes, compiled by the author over the seven years he developed and wrote the book. Content of these Notes will be featured in the conversations.

Edward G. Pettit is the Sunstein Manager of Public Programs at The Rosenbach. In a former life, he taught monster books at a Philadelphia university. When not participating in reading marathons, he can usually be found at literary-themed cocktail parties.

Tucker Christine first picked up the novel Dracula as an act of defiance in the third grade. He hasn’t put it down since. Tucker has been a musician, an audio engineer, an automotive machinist, and a caterer. He currently resides with his wife, daughter, and son in Bensalem where he operates a BBQ catering company with his brother, and leads the instrumental band Pleated Gazelle. Through it all he has been a lifelong reader, fan, and collector of all things Dracula.

Josh Hitchens is a Philadelphia-based theater director, actor, and playwright. He has written and performed several adaptations of classic horror novels, including Stoker’s Dracula (which he researched at The Rosenbach), Mary Shelley’s Frankenstein (performed at the Mutter Museum), The Legend of Sleepy Hollow (performed in Clark Park with Curio Theatre Company), and The Picture of Dorian Gray (performed at the Ebenezer Maxwell Mansion). His original solo plays include The Confession of Jeffrey Dahmer and the autobiographical Ghost Stories. Josh also writes and narrates the podcast Going Dark Theatre, which explores in-depth tales of hauntings, unsolved mysteries, and horrific history. The podcast is available on iTunes, Apple Podcasts, Spotify, and Podbean. joshhitchens.weebly.com

Josh O’Neill is an Eisner and Harvey Award-winning editor, author and curator, as well as the co-founder and publisher of the Philadelphia small presses Locust Moon and Beehive Books, where he explores the unique capacities of graphic art and visual storytelling through art history, creative collaboration and experimental publishing. He is currently in the midst of a headache-inducing attempt to produce a particularly insane and ambitious edition of Dracula.