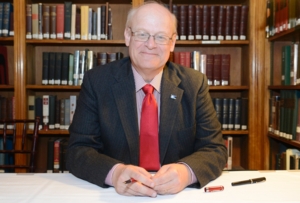 "What If Lincoln Had Lived?" A Virtual Presentation by Dr. Allen Guelzo

Join the Parkway Central Senior Services to celebrate Lincoln's birthday with an expert who has devoted his career to studying the thoughts, actions, and hopes of America's sixteenth president.

This event will be presented virtually on Zoom. To register, please click here.

While Lincoln didn't live long enough to draw up a detailed Reconstruction program, Dr. Allen Guelzo, Senior Research Scholar in the Council of the Humanities at Princeton University, has some thoughtful guesses about President Lincoln's priorities. Voting rights for African Americans would have been at the top of the list. While the South would have been fiercely opposed to such a step, Lincoln, a canny politician with the instincts of a frontier horse-trader, knew what the white Southern elite wanted most was amnesty. He was prepared to grant this--but not to everyone. While many of the President's colleagues wanted the key leaders of the Confederacy shot, or imprisoned for years, Lincoln had a different idea. He simply wanted them gone. From his perspective, all Americans would breathe easier with their enemies exiled in Europe or Argentina.

As a self-made man who had been born in a log cabin, Lincoln was keenly sensitive to the fact that to succeed as citizens and free people, Black Americans would need opportunities to own land and grow their personal wealth. Had he lived, the opening of the American West would have also been the story of a different destiny for many.

Dr. Allen C. Guelzo is Director of the James Madison Program Initiative on Politics and Statesmanship and Senior Research Scholar in the Council of the Humanities at Princeton University. A New York Times best-selling author, Dr. Guelzo is a noted historian of the Civil War-era and Abraham Lincoln.

9:00 A.M.
Care Crisis: A Time Capsule of Art & Curating During a Pandemic | Telephone

7:30 P.M.
“Dangerous Friends: How the Friendship Between McCarthy and the Kennedy’s Blighted the Lives of John and Robert Kennedy” with David Nasaw | Virtual Program

7:30 P.M.
“Death by a Thousand Cuts: How a Broken Promise and a Boston Brahmin Destroyed Joe McCarthy” with Peter Siskind | Virtual Program