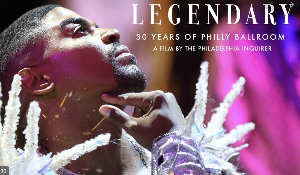 Legendary is an inside look into the effort to preserve Philadelphia's ballroom scene, a predominantly Black LGBTQ+ safe-space that has endured for over 30 years. Featuring rare archival footage and interviews from the ballroom scene’s most legendary figures, the film highlights a culture continually offering performance as an act of resistance and community. Directed by Cassie Owens, Raishad Hardnett, and Lauren Schneiderman and produced by The Philadelphia Inquirer in 2019, Legendary screened at several film festivals including the BlackStar Film Festival, where it won the festival’s Shine Award, and was nominated for a regional Mid-Atlantic Emmy Award. Before we watch Legendary, we will watch newly archived material from Philadelphia’s ballroom scene.

4:00 P.M.
One Book Wednesday on the Stoop with Blue Stoop | Online
6:30 P.M.
Looking Out and Building Up: Imagining Black Masculinities After Patriarchy | Online