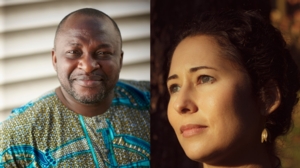 Uwem Akpan’s Say You’re One of Them, “a startling debut collection” (The New York Times) of short stories was a Wall Street Journal #1 bestseller, the 2009 Oprah Book Club Selection, and was translated in to 12 languages. It was named to several publications’ “best of the year” lists and earned the Hurston/Wright Legacy Award and the Open Book Award, among other honors. A professor in the University of Florida’s MFA writing program and the recipient of many literary fellowships, Akpan has published stories and autobiographical work in The New Yorker, the Nigerian edition of The Guardian, and the Hekima Review, among other places. His debut novel tells the satirical story of a Nigerian editor who experiences racism and feelings of white cultural superiority underneath the façade of the Manhattan publishing industry.

Kirstin Valdez Quade is the author of the “quirky, compelling” and “polished debut” (Dallas Morning News) story collection Night at the Fiestas, winner of the National Book Critics Circle’s John Leonard Prize. A professor of creative writing at Princeton University, she has earned the “5 Under 35” award from the National Book Foundation, the Rome Prize, and a Stegner Fellowship. Her work has appeared in The New Yorker, The New York Times, and The O. Henry Prize Stories anthology, among other places. The Five Wounds, Quade’s debut novel, finds five generations of a New Mexican family converging in the year following an unexpected birth.