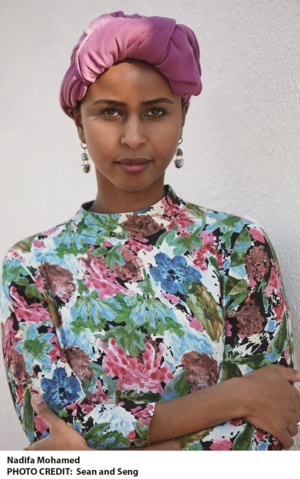 Cost: Free or $31.00-Book with ticket and *signed book plate

In conversation with Rabih Alameddine, National Book Award nominated author of An Unnecessary Woman, The Angel of History, The Hakawati, and most recently, The Wrong End of the Telescope.

Somali-British author Nadifa Mohamed is the writer of the renowned novels Black Mamba Boy and The Orchard of Lost Souls. A regular contributor to The Guardian and the BBC, she is a fellow of the Royal Society of Literature and is a lecturer in creative writing at Royal Holloway, University of London. Mohamed is the recipient of the Somerset Maugham Award, and was named one of Granta's best young British novelists of 2013, and was a part of the 2014 Africa39 list of the most promising writers under the age of 40 from sub-Saharan Africa. A finalist for the 2021 Booker Prize, The Fortune Men is a novel about Mahmood Mattan, a young Somali sailor falsely accused of a violent crime in 1950s Cardiff, Wales.

“Nadifa Mohamed’s The Fortune Men is a blues song cut straight from the heart. It tells about the unjust death of an innocent Black man caught up in a corrupt system. Nadifa’s masterful evocation of the full life of Mahmood Mattan, the last man executed in Cardiff for a crime he was exonerated for forty years later, is brought alive with subtle artistry and heartbreaking humanity. In one man’s life Mohamed captures the multitudes of homelands, dialects, hopes, and prayers of Somalis, Jews, Maltese and West Indians drawn in by the ships that filled Wales’ Tiger Bay in the 1950’s, all hoping for a future that eludes Mattan.”—Walter Mosley, author of Devil in a Blue Dress

Books will be mailed after the event.
Please allow up to three weeks for delivery.
*Signed book plates will ship separately in late January
U.S. orders only.
Books sold by Uncle Bobbie's Coffee and Books