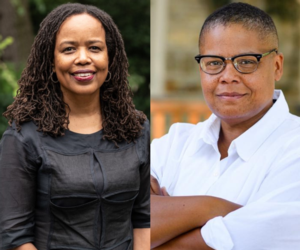 One of academia’s leading authorities on African American literature, enslavement, gender studies, and the ways in which marginalized people are excluded in historical narratives, Saidiya Hartman is a University Professor at Columbia University. Her works include Wayward Lives, Beautiful Experiments: Intimate Histories of Riotous Black Girls, Troublesome Women, and Queer Radicals; Lose Your Mother: A Journey Along the Atlantic Slave Route; and numerous essays on feminism, film, and photography. Currently a member of the editorial board at Callaloo and a MacArthur fellow, Hartman has earned Fulbright, Rockefeller, and Guggenheim fellowships. A revised and updated edition of her “audacious” and “provocative” (The Nation) 1997 historical exploration of the lives of several Black women in Harlem and Philadelphia in the 1890s, Scenes of Subjection seeks to turn away from the “terrible spectacle” and toward the forms of routine terror and quotidian violence characteristic of slavery, illuminating the intertwining of injury, subjugation, and selfhood even in abolitionist depictions of enslavement.

Keeanga-Yamahtta Taylor is the Leon Forrest Professor of African American Studies at Northwestern University. Formerly a professor of African American Studies at Princeton University for eight years, her books include From #BlackLivesMatter to Black Liberation, How We Get Free, and Race for Profit, a finalist for the 2020 Pulitzer Prize in history. Taylor has been named one of the hundred most influential African Americans in the United States by The Root and Essence Magazine named her among the top one hundred “change makers” in the county. She has been appointed as a Distinguished Lecturer for the Organization of American Historians by the Organization of American Historians.A guest on such outlets as Democracy Now!, The Intercept, and All Things Considered, she has contributed opinion pieces to The New York Times, The Guardian, and The Paris Review, among many other periodicals.

Due to the changing nature of the COVID-19 pandemic, please visit our website before all events to find the latest guidance about mask requirements.
Books will be available for purchase at the library on event night.
A book signing will follow the presentation.
Books provided by Uncle Bobbie's Coffee and Books