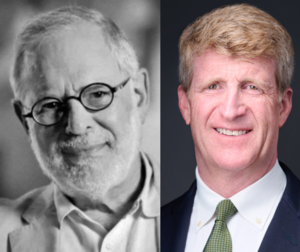 VIRTUAL - Neal Gabler | Against The Wind: Edward Kennedy and the Rise of Conservatism, 1976-2009 with Patrick Kennedy

PLEASE NOTE, THE EVENT HAS MOVED TO ZOOM. TICKET PURCHASERS WILL RECEIVE A LINK VIA EMAIL.

Neal Gabler is the author of Catching the Wind: Edward Kennedy and the Liberal Hour, a “rich and insightful” (The New York Times) account of the figure known as the most complex of the Kennedys. His other work includes An Empire of Their Own: How the Jews Invented Hollywood, Life the Movie: How Entertainment Conquered Reality, and award-winning biographies of Walt Disney and Walter Winchell. The former chief nonfiction judge for the National Book Awards, Gabler has earned a Guggenheim Fellowship, a Shorenstein Fellowship, and a Woodrow Wilson Public Policy Scholarship, among other honors. The second volume in his acclaimed biography of Ted Kennedy, Against the Wind follows the “lion of the Senate” as he works to safeguard progressive ideals and legislation during an era of conservative dominance.

For 16 years Patrick J. Kennedy served Rhode Island’s First Congressional District in the U.S. House of Representatives, where he was the lead sponsor of the landmark Mental Health Parity and Addiction Equity Act. He also authored and co-sponsored dozens of bills aimed at treating neurological and psychiatric disorders and served on numerous committees and subcommittees, including the House Appropriations Committee, the Subcommittee on Labor, and the Subcommittee on Veterans Affairs. The founder of The Kennedy Forum, a nonprofit dedicated to transforming mental health and addiction care, Kennedy is also the founder of the parity rights advocacy group Don’t Deny Me, the co-founder of the online learning platform Psych Hub, and is the co-chair of the Action Alliance’s National Response to COVID-19, among many other public health groups. In 2015 he co-authored with Stephen Fried the New York Times bestseller A Common Struggle, a roadmap to health equity in the United States based on his personal and professional experiences.