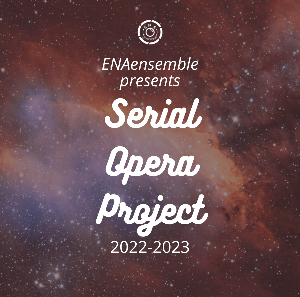 ENAensemble presents its second Serial Opera Project, a multi-month performance of a new chamber opera, written by three different composer-librettist teams and centered around the loose theme of “the celestial.” Each performance in the series will feature a premiere of the next part of the opera, as well as selected chamber works and a song for voice and one instrument as part of ENAensemble’s New Song Series. Performances will be held in November, and January,  culminating in a fully-realized “binge-staging” of the opera in 2023.

November 14th with chamber works starting at 4:30 pm and "the celestial" starting at 5:30 pm

Contact the Music Department at 215-686-5316 or Email: eRefMus@freelibrary.org with questions.

ENAensemble is a multimedia performance organization that specializes in live performances of opera, cabaret, and cinema. Led by Music Director Evan Kassof, Theatrical Director Nicole Renna, and Artistic Director Anais Naharro-Murphy, ENAensemble’s first production, The Propaganda Machine Show sold out its four-night run to critical acclaim at the 2018 Philly Fringe Festival. Other production highlights have included chasing the moon, a fully staged theatrical performance of Schoenberg’s Pierrot Lunaire, along with works by Ravel, Stravinsky, and Kassof; its 2019 Fringe Festival Production Between, featuring the binge-staging of their first Serial Opera Project and Kassof and Hut-Kono’s opera Ganymede 5. ENAensemble prides itself in presenting performances in non-traditional spaces while still creating immersive theatrical environments.

For more information about ENAensemble and the Serial Opera Project, please visit https://www.enaensemble.org/.

Contact the Music Department at 215-686-5316 or Email: eRefMus@freelibrary.org with questions.

2:00 P.M.
Virtual Sundays on Stage: Keepers of the Culture | Virtual

2:00 P.M.
Virtual Sundays on Stage: The Nutcracker from Pages to Pirouettes | Virtual