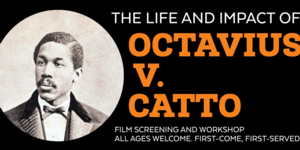 Octavius V. Catto: A Legacy for the 21st Century

Octavius V. Catto was a 19th century civil rights activist, scholar, athlete, and community leader. In September 2017 a coalition of community activists, scholars, and public servants had the joy of dedicating a memorial at City Hall to this local hero, making him the first individual African American to be honored with a statue on public land in Philadelphia.