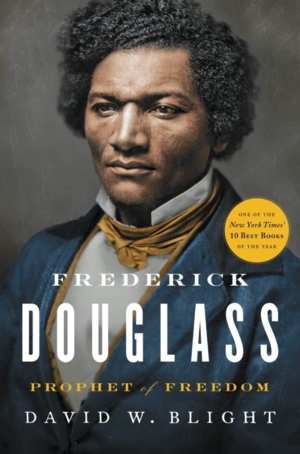 Do you enjoy reading? We read critically acclaimed nonfiction old and new. All readers welcome. For additional information, please call 215- 685-1633.

The definitive, dramatic biography of the most important African American of the nineteenth century: Frederick Douglass, the escaped slave who became the greatest orator of his day and one of the leading abolitionists and writers of the era. In this remarkable biography, the first major look at Douglass in nearly 25 years, David Blight has drawn on new information held in a private collection that few other historians have consulted, as well as recently discovered issues of Douglass’s newspapers. Douglass, like many great men, was a person of contradictions. Blight explores those contradictions, painting Douglass as a complete human being, even as he lays out the clear argument for his greatness. This thorough and highly readable biography traces Douglass’s entire life, starting on a plantation in Maryland, covering his education and eventual escape, his two marriages, his complicated relationship with his family, and his work as an abolitionist and orator. In the end, the reader will walk away with a deeper grasp of a still deeply misunderstood chapter of American history, as well as understanding, respect, and admiration for one of the county’s greatest figures. This is a book that speaks to our time as well as Douglass’. For readers daunted by the length of this book, we invite you to read one of Frederick Douglass’ autobiographies. Each offers unique insights. We will integrate all three into our discussion:  A Narrative of the Life of Frederick Douglass, an American Slave, Frederick Douglass, 1845;  My Bondage and My Freedom, Frederick Douglass, 1855; Life and Times of Frederick Douglass, Frederick Douglass, 1881, revised 1892.