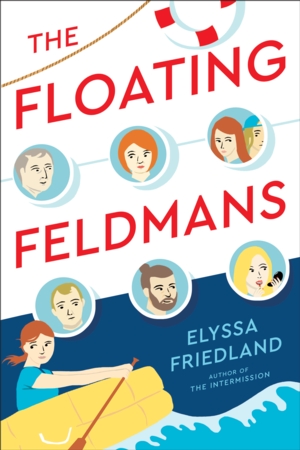 Elyssa Friedland will present her novel The Floating Feldmans, in conversation with University of Pennsylvania Professor Kermit Roosevelt. Books will be available for purchase.

The Floating Feldmans: Sink or swim… Or at least that's what Annette Feldman tells herself when she books a cruise for her entire family. It's been over a decade since the Feldman clan has spent more than twenty-four hours under the same roof, but Annette is determined to celebrate her seventieth birthday the right way. Just this once, they are going to behave like an actual family.

Elyssa Friedland has established herself as a master of writing insightful novels about modern life, relationships, and the secrets we keep to protect ourselves and the ones we love. Elyssa is a graduate of Yale University and Columbia Law School and lives in New York City with her family.

Kermit Roosevelt is a professor of law at the University of Pennsylvania Law School, where he teaches constitutional law and creative writing. He has written two novels, Allegiance and In the Shadow of the Law.

This program will be held in the meeting room on the library’s lower level and we regret there is no elevator.