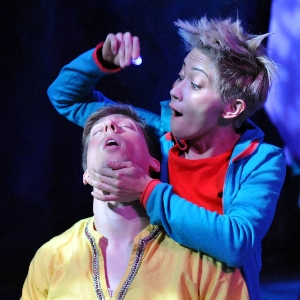 Shakespeare’s plays are full of supernatural elements and entities, but how did these fantastic spectacles appear on stage during Shakespeare’s time? What did Shakespeare’s fairies look like? How were ghosts recognized on stage? What were the techniques of stage-magic that made gods and witches (dis)appear or made Oberon turn invisible? Paying particular attention to the material embodiment of magicians, devils, ghosts, and fairies, this lecture will attempt to answer these questions and illuminate the role of the audience in the creation of magic on the early modern stage.

Lecturer:  Jim Casey is an Associate Professor of English at Arcadia University in Philadelphia and a recent Fulbright Scholar at the University of Debrecen in Hungary. He loves all things Shakespeare and all things geeky, especially those involving the fantastic. He has published essays on fantasy, monstrosity, medieval and early modern poetry, critical theory, comics, anime, masculinity, grief, old age, Shakespeare, Chaucer, and Battlestar Galactica. He is the editor of the New Kittredge Shakespeare edition of Shakespeare and Fletcher’s The Two Noble Kinsmen and, with Christy Desmet and Natalie Loper; he is the co-editor of Shakespeare/Not Shakespeare, a collection of essays on Shakespeare and adaptation

Shakespeare in the World Lecture Series is presented by The Philadelphia Shakespeare Theatre in partnership with The Free Library of Philadelphia.  Free admission.  Please register: https://web.ovationtix.com/trs/pr/1016468