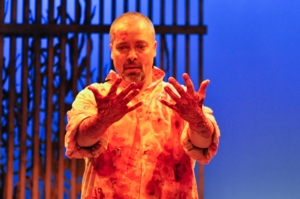 Carol Chillington Rutter suggests that while bodies in texts may disappear, “Material bodies in the theatre remain in view.” Traumatized bodies in literature or criticism can be skipped over or even erased, but in the closed space of the theatre, we cannot ignore the bodies in pain before us. Focusing on Titus Andronicus (one of Shakespeare’s bloodiest plays), this lecture will explore the gendering of violence, the complicity of the audience in violent acts on stage, and the cultural attitudes toward violence during Shakespeare’s time.

Lecturer:  Jim Casey is an Associate Professor of English at Arcadia University in Philadelphia and a recent Fulbright Scholar at the University of Debrecen in Hungary. He loves all things Shakespeare and all things geeky, especially those involving the fantastic. He has published essays on fantasy, monstrosity, medieval and early modern poetry, critical theory, comics, anime, masculinity, grief, old age, Shakespeare, Chaucer, and Battlestar Galactica. He is the editor of the New Kittredge Shakespeare edition of Shakespeare and Fletcher’s The Two Noble Kinsmen and, with Christy Desmet and Natalie Loper; he is the co-editor of Shakespeare/Not Shakespeare, a collection of essays on Shakespeare and adaptation.

Shakespeare in the World Lecture Series is presented by The Philadelphia Shakespeare Theatre in partnership with The Free Library of Philadelphia.  Free admission.  Please register: https://web.ovationtix.com/trs/pr/1016470