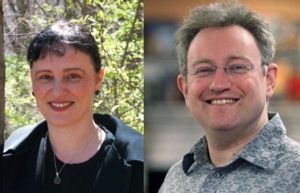 Anna Kashina is inspired by her diverse backgrounds as a Russian-born scientist, a competitive ballroom dancer, and a fan of martial arts, history, and folklore. She is the author of the award-winning Majat Code series featuring adventure fantasy, medieval politics, assassins, and romance. She lives in the US Northeast, where she combines her career in biomedical research and her passion for writing.

Alex Shvartsman is a writer, translator, and anthologist from Brooklyn, NY. Over 120 of his short stories have appeared in Analog, Nature, Strange Horizons, and elsewhere. He won the 2014 WSFA Small Press Award for Short Fiction and was a two-time finalist for the Canopus Award for Excellence in Interstellar Fiction (2015 and 2017). He is the editor of the Unidentified Funny Objects annual anthology series of humorous SF/F, and of Future Science Fiction Digest. His debut novel, ERIDANI’S CROWN, is set to be published in October, 2019.