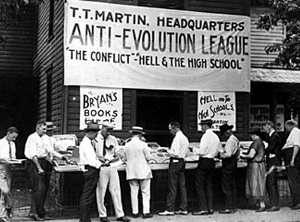 Darwin Versus Religion: The Conflict between Evolution and Creationism

Charles Darwin deliberately omitted any discussion of human evolution in his Origins of the Species (1859) because he feared the reaction from church leaders. Only in his last work, The Descent of Man (1871), did he apply natural selection to humans.  His fears were certainly justified.  A firestorm erupted between his defenders and church authorities who viewed his work as being in conflict with Biblical teachings, a controversy that persists. Yet some Christian denominations came to embrace evolution.

Barry Levis, professor emeritus of history, will examine the history of this dispute from Darwin to the 2005 Pennsylvania decision banning the teaching of intelligent design.