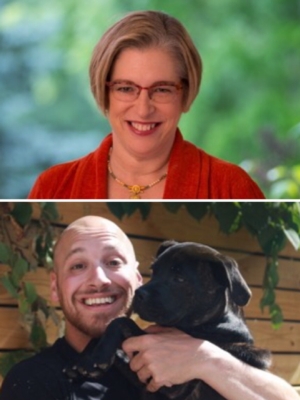 After decades as an academic, holding an endowed chair as a professor of film at Vassar College, Sarah Kozloff tried her hand at fiction writing. The result is a 4-volume epic fantasy, The Nine Realms, which will be released on a rapid publication schedule in the winter of 2020 — “4 Books, 4 Months, The Nine Realms”—from Tor. The books use everything Kozloff knows about literature, film, and narrative. She started with the question, “What if Aragorn had been a woman and a country awaited the return of the queen?” As it grew, however, the story became an exploration both of political issues such as xenophobia and water pollution and of interpersonal relationships.

Andrew Katz, when not reading and writing fiction, enjoys puppers and doggos, black coffee, hiking, and writing bios that read like poorly made dating profiles. He is also the proud owner of several paintings that he painted himself and now hides from the world because they’re bad. Last July, Lanternfish Press published his novel, The Vampire Gideon’s Suicide Hotline and Halfway House For Orphaned Girls. Andrew lives and works in Philadelphia, PA.