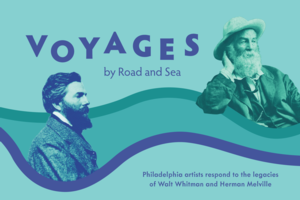 Hear Voyages by Road and Sea: Philadelphia Perspectives on Walt Whitman and Herman Melville co-curator Edward Whitley talk about the life and work of Walt Whitman, and then take a guided tour of the exhibition.

The great American poet Walt Whitman didn't move around a lot. While he spent most of his life in just three East Coast cities--New York, Philadelphia, and Washington, D.C.--his imaginative exploration of the United States in the nineteenth century produced insights about issues that still impact our world today, including globalization, industrialization, immigration, racism, and imperialism. Professor Edward Whitley of Lehigh University will explain how Whitman wrote and revised his major book of poems, Leaves of Grass, over a forty-year period between the 1850s and the 1890s when these and other important issues left a lasting imprint on the U.S culture and politics.

Lecture will occur in rooms 405/406 (Fourth Floor), followed by the gallery walk in the West Gallery (First Floor).