Books to Screen: Nonfiction to Film
Nonfiction that have had movies or TV shows based on them.

Class Action: the Story of Lois Jenson and the Landmark Case That Changed Sexual Harassment Law by Bingham, Clara and Laura Leedy Gansler

Notes: This collaboration between a journalist and a lawyer describes in elaborate detail the tortuous path of the first class-action sexual harassment lawsuit, Jenson v. Eveleth Mines. In 1975, the Minnesota mine hired its first four women as the result of a consent decree; Lois Jenson took one of the jobs. Subjected to disgusting and relentless sexual harassment, Jenson went in turn to the company, the union, the state department of human rights, and finally, in 1988, to private counsel. With Title VII expert Paul Sprenger at the helm, the case took another 11 years, as the company's attorneys waged an intense "nuts and sluts" defense, a strategy that cost the mine $15 million. This account was adapted as fiction into the movie "North Country", starring Charlize Theron.
ISBN: 0385496133

Vengeance: the True Story of an Israeli Counter-Terrorist Team by Jonas, George

Notes: This book describing part of Israel's Operation Wrath of God, the Israeli assassination campaign launched after the 1972 Munich Olympics massacre, was the basis for Steven Spielberg's 2005 film "Munich", as well as the 1986 television movie "Sword of Gideon"
ISBN: 0671506110

See No Evil : the True Story of a Ground Soldier in the CIA's War on Terrorism by Baer, Robert

Notes: In See No Evil, one of the CIA's top field officers of the past quarter century recounts his career running agents in the back alleys of the Middle East. In the process, Robert Baer paints a chilling picture of how terrorism works on the inside and provides compelling evidence about how Washington politics sabotaged the CIA's efforts to root out the world's deadliest terrorists. George Clooney stars in "Syriana", which was based on this book.
ISBN: 9781400046843

Capote: a Biography by Clarke, Gerald

Notes: From instant celebrity at age 23 to overweight, alcoholic loner in his 50s, Truman Capote streaked across the middle of this century on a comet of genius, self-destruction, and fame. This biography was the basis for the 2005 film "Capote", for which Philip Seymour Hoffman won an Academy Award.
ISBN: 0786716614 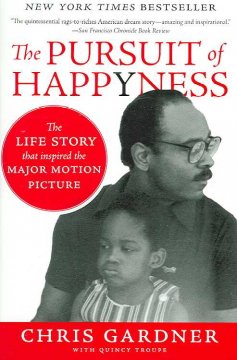 The Pursuit of Happyness by Gardner, Chris

Notes: Chris Gardner made a vow that no matter what happened in his life, he'd be a committed father figure to his children. Yet even the most well intentioned would have been excused for breaking that vow if confronted by the challenges that Gardner faced, circumstances that left him and his toddler son homeless, living on the streets of San Francisco. But rather than give up his son, Gardner continued to pursue his dream of becoming a successful stockbroker despite having neither Wall Street experience nor even a college degree. Will Smith and his son Jaden starred in the 2006 movie based on this book.
ISBN: 0060744863

Notes: From 1968 to the early 1970s, the self-styled "Zodiac" killer made headlines in the San Francisco Bay Area. In random attacks, he is known to have murdered six persons; in a series of letters to newspapers, which sometimes included cryptograms, he boasted of many more. To this day, the infamous case remains unsolved and surprisingly little has been written about it. This book and the followup "Zodiac Unmasked" are the basis for the 2007 film "Zodiac" starring Robert Downey Jr. and Jake Gyllenhaal.
ISBN: 0425212181 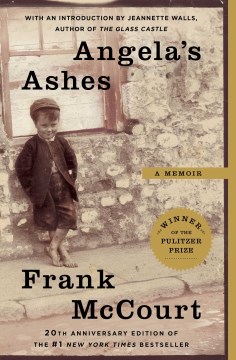 Notes: "When I look back on my childhood I wonder how I managed to survive at all. It was, of course, a miserable childhood: the happy childhood is hardly worth your while. Worse than the ordinary miserable childhood is the miserable Irish childhood, and worse yet is the miserable Irish Catholic childhood". So begins the luminous memoir of Frank McCourt, born in Depression-era Brooklyn to recent Irish immigrants and raised in the slums of Limerick, Ireland. Frank's mother, Angela, has no money to feed the children since Frank's father, Malachy, rarely works, and when he does he drinks his wages. Yet Malachy - exasperating, irresponsible and beguiling - does nurture in Frank an appetite for the one thing he can provide: a story. Frank lives for his father's tales of Cuchulain, who saved Ireland, and of the Angel on the Seventh Step, who brings his mother babies. Alan Parker adapted this memoir as a BAFTA-nominated feature film in 2000.
ISBN: 068484267X

The Perfect Storm : a True Story of Men Against the Sea by Junger, Sebastian

Notes: It was the storm of the century -- a tempest created by so rare a combination of factors that meteorologists deemed it "the perfect storm." In a narrative taut with the fury of the elements, Sebastian Junger takes us deep into the heart of the storm, depicting with vivid detail the courage, terror, and awe that surface in such a gale. Junger illuminates a world of swordfishermen consumed by the dangerous but lucrative trade of offshore fishing--"a young man's game, a single man's game"--and gives us a glimpse of their lives in the tough fishing port of Gloucester, Massachusetts; he recreates the last moments of the Andrea Gail crew and recounts the daring high-seas rescues that made heroes of some and victims of others; and he weaves together the history of the fishing industry, the science of storms, and the candid accounts of the people whose lives the storm touched. "The Perfect Storm" was adapted in 2000 starring George Clooney.
ISBN: 0393050327 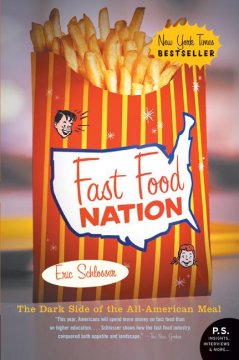 Fast Food Nation : the Dark Side of the All-American Meal by Schlosser, Eric

Notes: Are we what we eat? To a degree both engrossing and alarming, the story of fast food is the story of postwar America. Though created by a handful of mavericks, the fast food industry has triggered the homogenization of our society. Fast food has hastened the malling of our landscape, widened the chasm between rich and poor, fueled an epidemic of obesity, and propelled the juggernaut of American cultural imperialism abroad. That's a lengthy list of charges, but Eric Schlosser makes them stick with an artful mix of first-rate reportage, wry wit, and careful reasoning. "Fast Food Nation" was adapted and fictionalized into a film in 2006.
ISBN: 0060838582

Notes: Arbus already had a history of severe depressions and a crumbling marriage by the time she began to take the controversial, technically innovative pictures of dwarfs, nudists and drag queens that won her a reputation as "a photographer of freaks." Bosworth balances the lurid details -- rumors that Arbus had sex with her subjects, that she photographed her own suicide in 1971 -- with a nuanced appraisal of an artist whose images captured the uneasy mood of the 1960s by expressing her personal obsessions. Adapted as "Fur" in 2006, the film stars Nicole Kidman and Robert Downey Jr.
ISBN: 0393326616