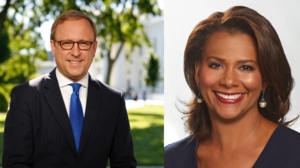 Jonathan Karl | Betrayal: The Final Act of the Trump Show

Jonathan Karl is the author of Front Row at the Trump Show, an instant New York Times bestseller that peered behind the scenes into President Trump and his allies’ unprecedented actions. The chief White House correspondent and chief Washington correspondent for ABC News, Karl has written extensively about Trump’s presidency., Karl has also covered some of D.C.’s most important beats, including four presidential administrations, Capitol Hill, the Pentagon, and the State Department. He was the president of the White House Correspondents’ Association from 2019 to 2020 and has earned the Walter Cronkite Award for National Individual Achievement, an Emmy Award, and the Everett McKinley Dirksen Award, the highest honor for Congressional reporting. In Betrayal, Karl recounts the chaotic events that followed the 2020 presidential election and the former president’s stunning downfall.