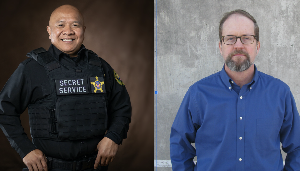 Leth Oun and Joe Samuel Starnes | A Refugee’s American Dream: From the Killing Fields of Cambodia to the U.S. Secret Service

Veteran United States Secret Service Officer Leth Oun has protected presidents and vice presidents in four administrations in almost every state and more than a dozen countries. A political refugee who survived the genocidal Killing Fields of Cambodia, he arrived in America in 1983, became a citizen in 1990, earned a college degree from Widener University in 1998, and went to work for the federal government in 2000.

Joe Samuel Starnes three celebrated novels include Calling, Red Dirt, and Fall Line, which was named to The Atlanta Journal Constitution’s 2011 “Best of the South” list. All of these works are featured in an essay in Twenty-First-Century Southern Writers: New Voices, New Perspectives. His articles have appeared in several periodicals, including The New York Times, The Washington Post, and The Boston Globe, and his essays, short stories, and poems have been published in numerous literary journals.

A Refugee’s American Dream recounts Oun’s father’s execution by the brutal Khmer Rouge, his almost four years of enslavement in the Killing Fields followed by more than three years in refugee camps, his arrival in America as a penniless 17-year-old, and his transcendent journey to the Secret Service that culminates with his return to Cambodia as part of President Obama’s protection detail.