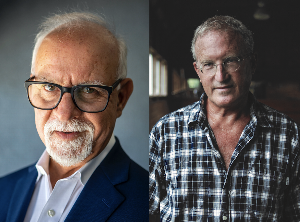 Steve Lopez | Independence Day: What I Learned about Retirement from Some Who’ve Done it and Some Who Never Will

In conversation with Mark Bowden

A Los Angeles Times columnist for the past 22 years and former columnist for The Philadelphia Inquirer, Steve Lopez is a four-time finalist for the Pulitzer Prize for commentary, and is the winner of the H.L. Mencken, the Ernie Pyle, and Mike Royko Awards for his contributions to journalism. He is also the author of the One Book, One Philadelphia selection The Soloist, a national bestseller which was awarded the PEN USA Literary Award for Nonfiction for its tender portrayal of a former music prodigy who struggled with mental illness. The book was later made into a feature film starring Robert Downey, Jr. Lopez’s other work includes the novels Third and Indiana, The Sunday Macaroni Club, and In the Clear, two collections of columns, and on-air reporting for KCET-TV in Los Angeles, which garnered him three local Emmys. Framed through the author’s own ambivalence about retirement, Independence Day follows people across a wide spectrum of jobs, backgrounds, and identities to help provide insight into one of life’s pivotal moments.

Mark Bowden is the author of 15 bestselling books of investigative journalism, including Blackhawk Down, adapted by Ridley Scott into a popular film; Killing Pablo, winner of the Overseas Press Club’s Cornelius Ryan Award for book of the year; The Three Battles of Wanat, a collection of his best long-form essays; and Hue 1968, the story of the Vietnam War’s bloodiest battle as told by participants from both sides. His forthcoming book Life Sentence: The Brief and Tragic Career of Baltimore’s Deadliest Gang Leader will be published in April.