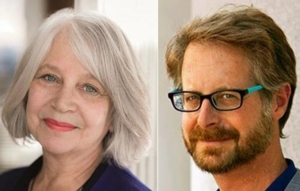 “A marvelous storyteller” (Chicago Tribune), Mary Morris explores some of her favorite themes—away versus home, childhood memories, and the Midwest—in such works of fiction as A Mother’s Love, House Arrest, and The Jazz Palace. The winner of the Rome Prize and the Ainsfield-Wolf Award for Fiction, she is also the author of the travel classic Nothing to Declare: Memoirs of a Woman Traveling Alone. In Gateway to the Moon, Morris interweaves the stories of a secluded New Mexican town’s present-day residents with those of its original settlers 500 years earlier.

Nathaniel Popkin is the author and co-author of five books, including Lion and Leopard, Song of the City, and Philadelphia: Finding the Hidden City. He is also co-editor of the literary anthology Who Will Speak for America?, the fiction editor of Cleaver Magazine, and the writer/editor of the Emmy-winning documentary film series Philadelphia: The Great Experiment. In Everything is Borrowed, he ponders regret, history, and the intransigence of the urban landscape through the strangely parallel lives of two men separated by centuries.

7:30 P.M.
VIRTUAL - Elizabeth Hinton | America on Fire: The Untold History of Police Violence and Black Rebellion Since the 1960s | Virtual