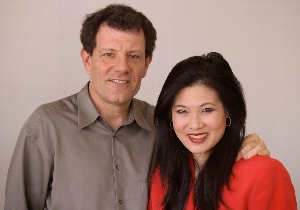 The first married couple to win the Pulitzer Prize, Nicholas Kristof and Sheryl WuDunn are acclaimed for their reportage of international social injustices, women’s issues, and Asia’s economic ascendance. Their “exquisitely crafted” and “sensationally interesting” (Washington Post) bestselling books include Half the Sky, Thunder from the East, and China Wakes. In 2009, they received the Dayton Literary Peace Prize’s Lifetime Achievement Award. Kristof has written for the New York Times since 2001, during which time he received an additional Pulitzer for his columns about the genocide in Darfur. Also an accomplished print journalist, WuDunn now works as an executive at several of America’s top investment banking firms. In Tightrope, the duo employs the stories of real people to make a plea for solutions to the plight of working-class America.