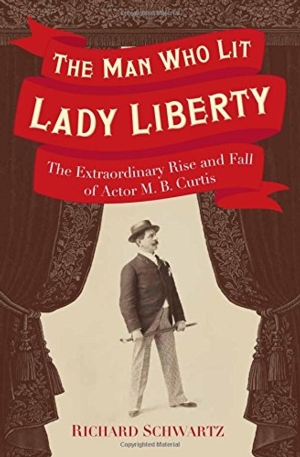 Richard Schwartz will discuss his book, The Man Who Lit Lady Liberty, The Extraordinary Rise and Fall of Actor M. B. Curtis.  Actor M. B. Curtis, an immigrant, became the only citizen to personally pay to light the Statue of Liberty, have a record breaking and ground breaking play about an immigrant traveling salesman which took the country by storm, was approached by Mark Twain to do a stage version of Connecticut Yankee in King Arthur’s Court, was a hotelier, a developer, a pioneer in the silent movie industry, a manager of one of the most talented African American entertainment troupes ever assembled and was accused of murdering a San Francisco police officer, making Curtis’ life as dramatic an arc that rivals anything created for the stage.

Richard Schwartz is a Philadelphia born and raised author living in California. He has fought forest fires for the US Forest Service, was a professional jazz/funk and Brazilian drummer, is a California Building Contractor and writes history books, giving many talks.

3:00 P.M.
What's Next? Entering Adulthood in an Uncertain Time

3:00 P.M.
What's Next? Finishing High School in an Uncertain Time