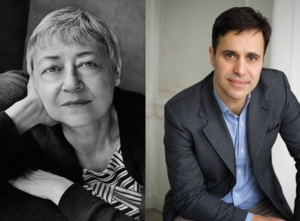 Sigrid Nunez | The Friend: A Novel with Keith Gessen | A Terrible Country: A Novel

Sigrid Nunez won the 2018 National Book Award for The Friend, “a penetrating, moving meditation on loss, comfort, memory” (NPR) in which a woman is forced to adopt her deceased best friend’s Great Dane. The recipient of a Berlin Prize, the Rome Prize in Literature, and a Whiting Award, Nunez is also the author of Salvation City, The Last of Her Kind, A Feather on the Breath of God, and Sempre Susan, a memoir about her friend and mentor Susan Sontag.

A founding editor of the popular online magazine n+1, Russian-born polymath Keith Gessen is the author of the novel All the Sad Young Literary Men and the editor of three nonfiction books. A journalism professor at Columbia University, he has written for a wide variety of publications, including The New Yorker, The London Review of Books, and The Atlantic. Gessen’s new novel tells the story of a New York émigré’s return to Putin’s Moscow to take care of his sick grandmother. “[T]his earnest and wistful but serious book gets good, and then it gets very good... [and] is a gift for those who wish to receive it” (The New York Times).