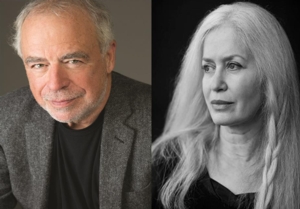 Richard Russo | Chances Are . . . with Amy Hempel | Sing to It: New Stories

Winner of the 2002 Pulitzer Prize for his novel Empire Falls, Richard Russo is acclaimed for capturing the “foolishness of this lonely world, but also the humor, friendship and love that abide” (San Francisco Chronicle). His novel Nobody’s Fool, starring the world-worn protagonist Sully and the irresistible residents of North Bath, New York, was adapted into a popular film starring Paul Newman and spawned a popular follow-up, Everybody’s Fool. In Chances Are . . ., three 66-year-old men convene on Martha’s Vineyard to reminisce about their college days and solve a mystery that has haunted them for decades.

“Among the strongest voices in American fiction” (Los Angeles Times), writer’s writer Amy Hempel is the author of the acclaimed short-story collections Reasons to Live, At the Gates of the Animal Kingdom, Tumble Home, and The Dog of the Marriage. The recipient of a Guggenheim Fellowship and the PEN/Malamud Award for Excellence in the Short Story, she teaches in the creative writing programs at Bennington College and Stony Brook Southampton. In Sing to It, Hempel employs her singular style of prose to reveal characters in search of connection, compassion, and reckoning.